Demi Lovato broke her social media silence to send an important message. — ‘Go out and VOTE!’ The singer hit the polls on Election Day, Nov. 6, just days after leaving rehab and nearly 4 weeks since her apparent overdose.

Demi Lovato, 26, looked healthy and happy while hitting the polls on November 6 to cast her vote in the midterm elections! The singer — who just completed a 90-day stint in rehab — posted a photo of herself at the polls with a smile on her face. “I am so grateful to be home in time to vote!”, she captioned the photo. “One vote can make a difference, so make sure your voice is heard! now go out and #VOTE!!!!”

Demi’s Instagram post is her first since taking a social media hiatus before entering rehab. Her last post, which has since been removed, was a statement thanking her friends and family for their support after she was hospitalized 10 days for an alleged overdose. The note, in which Demi signed personally, confirmed she had been treated at LA’s Cedar-Sinai medical center.

The “Sober” singer was out of rehab as of November 4, when she was photographed at Matsuhisa restaurant in Beverly Hills with Henry Levy. Levy is a clothing designer who founded the label, Enfants Riches Deprimes. He’s reportedly Demi’s “sober coach,” although the pair were seen holding hands. 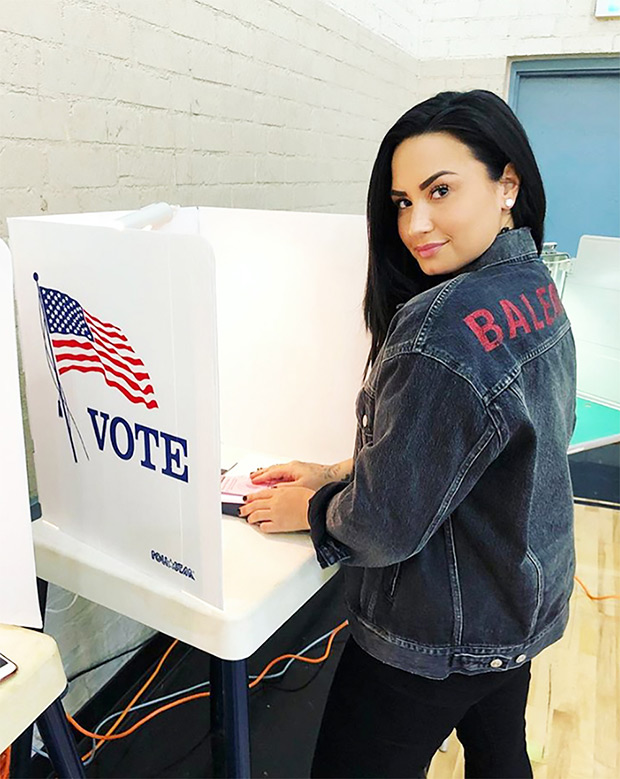 Demi Lovato posts a photo at the polls voting during the midterm elections on Tuesday, November 6, 2018.

Demi’s mother, Dianna De La Garza, 56, even confirmed that her daughter has been sober for 90 days. “Yes, she has 90 days and I couldn’t be more thankful or more proud of her because addiction being a disease, it’s work,” La Garza, 56, said of Demi during an appearance on Maria Menounos‘ Sirius XM show on October 27. Also in October, the singer’s younger half-sister, Madison De La Garza, 16, revealed that Demi is “doing really well” and is “working really hard on her sobriety.”

Earlier this year, Demi celebrated six years of sobriety in March. However, she revealed that she had relapsed in her single “Sober,” which was released on June 21. It was on July 24 that authorities had been called to Demi’s Hollywood Hills home after she allegedly overdosed. She reportedly received Narcan, a lifesaving drug that counteracts opioid. It was later reported that she had allegedly overdosed on Oxycodone, possibly laced with fentanyl — the same mix of drugs that killed Prince in 2016.