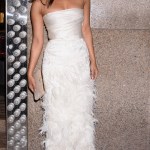 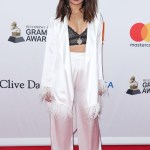 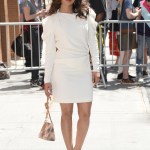 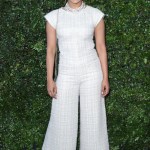 Priyanka Chopra is getting ready to walk down the aisle with husband-to-be Nick Jonas soon and she’s totally been getting in the bridal mood by wearing numerous white outfits. Here are some of our favorites!

Priyanka Chopra, 36, has been glowing with serious bride-to-be vibes in the past few months and wearing flattering white outfits has a lot to do with it! The gorgeous actress is reportedly set to walk down the aisle to marry the man of her dreams, Nick Jonas, 26, in Dec. and she’s been having a fun time preparing for the big day. From celebrating with a massive bridal shower to dancing the night away at a bachelorette party, Priyanka knows how to look her best and when she’s wearing white, we can’t help but think about her upcoming magical wedding!

Priyanka almost looked like she was already dressed to say “I do” when she wore a beautiful white dress at her bridal shower, which took place at the fancy Tiffany’s Blue Box Cafe in New York. She also turned heads when she wore a white sweater dress and posed for a picture by the water in what looks like Amsterdam, where her bachelorette party reportedly took place. Priyanka wore another white ensemble that consisted of a silky white dress suit for a pre-Grammy Awards event earlier this year.

Priyanka, who was born in India, got major attention when she stepped out in a white figure-flattering dress during a public appearance and again when she dressed up in a white Chanel pants outfit. She also wore a white dress in a pic she posted to Instagram that showed her posing with India’s prime minister Shri Narendra Modi back in Apr. On a few other occasions, Priyanka wore a white transparent top over a solid white top and a few white dressy button-down blouses.