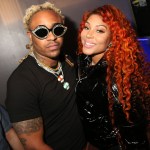 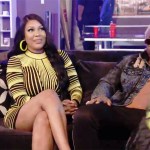 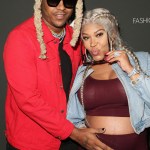 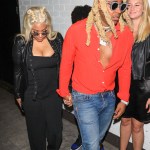 Love is in the air and a little boy is on the way for this ‘Love & Hip Hop: Hollywood’ couple! Take a look at photos of Lyrica and A1’s baby shower, plus the mom-to-be’s gorgeous high-slit dress!

It’s almost time! Lyrica Anderson, 29, and A1 Bentley, 31, are getting close to the birth of their baby boy, and they celebrated the major milestone with their friends at a Nov. 4 baby shower. The Love & Hip Hop: Hollywood stars stunned in all white outfits and posed for a few PDA pics together, kissing and cradling Lyrica’s baby bump. The dad-to-be had on a sleek suit, while his wife sported a strapless dress that hugged her gorgeous pregnancy curves — and also showed off lots of leg with a high slit! She looked incredible and was clearly feeling herself because she ended the night twerking in her tight dress. Just goes to show, there’s never a dull moment with these two!

In fact, Lyrica and A1’s entire pregnancy has been full of drama. The reality stars, who have been married since 2016, took a break before Lyrica got pregnant, which led to DNA test demands and baby daddy rumors once they were back together and she announced they were expecting. Even so, these two are sticking to their guns! The couple have not budged from their belief that this baby is theirs. And considering the people who have been the most vocal about not believing them, Ray J and Brooke, weren’t present at their gender reveal party, we can’t help but wonder if this doubtful duo was absent from the shower as well?

Whatever the case, w’re just glad to see that Lyrica and A1 had fun celebrating. They couldn’t seem to stop smiling at the party, which was accented with blue for their baby boy’s arrival.

#Lyrica and #A1 were all smiles at their baby shower. Swipe to see who else celebrated with the couple!

“This moment couldn’t have been any better,” Lyrica captioned an Instagram photo of their shower. “Thank you to every single person who showed their face !!”