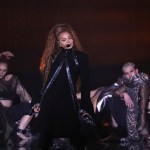 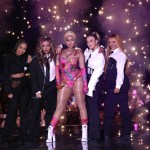 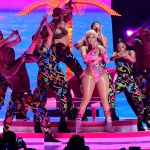 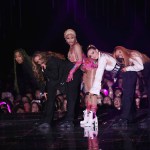 Just before taking the stage at the 2018 European Music Awards to accept MTV’s Global Icon Award, Janet Jackson, 52, slayed with a performance of her biggest hits. Running through her iconic tracks, including “All For You,” the living legend wowed the crowd, live from Spain, with an unforgettable performance. Plus, she performed her brand NEW hit “Made For Now.” Janet brought her classic big-time energy, and reminded the crowd why she still wears the crown after all these years. The singer wore an all black ensemble for her performance, and danced with the same vigor that she did when she released her earliest tracks!

The 2018 EMAs are shaping up to be the best yet, and not only because of Janet’s epic performance. There are TONS of A-lister celebrities in attendance, and the show was hosted by none other than Hailee Steinfeld. In addition to a performance from the host, stars such as Nicki Minaj, Halsey, Rosalía, Panic! at the Disco, Alessia Cara, Marshmello, Bastille, Anne-Marie, and Jack & Jack were included in the 2018 lineup!

Janet it on fire, and this past summer, she released a new single and video titled “Made For Now,” featuring Daddy Yankee — marking the first music released by the R&B veteran since 2016. Earlier that summer, she proved she still has it with a performance at the 2018 Panorama music festival. “It was only a matter of time before she received the award,” MTV said. “Her music has been loved around the world since the 1980s, when she first began releasing groundbreaking albums like Controland Janet Jackson’s Rhythm Nation 1814. She’s now one of the best-selling artists of all time.”

Were loving all of tonight’s performers, but Janet is definitely at the top of our list! This lady still slays the stage like no one else can! Watch the performance in the Tweet above!