Not everyone figured out Kim Kardashian’s Pamela Anderson Halloween costume and the reality star used the R word to those who didn’t get it. Pam’s now horrified about the insensitivity.

Kim Kardashian paid tribute to Pamela Anderson for Halloween by going in the super sexy outfit she wore to the 1999 MTV VMAs. Some of the 38-year-old’s younger friends just didn’t get it, as she had on a blonde wig, big furry hat, white bustier and overdone makeup. While the outfit was iconic in its day, it didn’t stand the test of time and Kim used the R word towards those who didn’t get that she was going as Pamela. The 51-year-old pop culture icon is mortified that Kim would use such language in this day and age. “Pam is upset that Kim used the R word while dressed as her for Halloween. Pam was flattered that Kim dressed as her for Halloween, she thought she looked hot, but was also really disappointed by her insensitivity,” a source close to the actress turned activist tells HollywoodLife.com EXCLUSIVELY.

“Pam works hard to be a force for good in the world, and works hard to protect animal rights too, and using a word like that is simply something she would never do. While Pam thought Kim looked great, she feels it is too bad that she ruined the sexy look by using a word that is so unsexy,” our insider adds.

This has been a teaching moment for Kim, who issued an apology via TMZ. “I want to apologize for what I said in a recent video post that is inappropriate and insensitive to the special needs community,” she said. “I try to learn from my mistakes and this is one of those times. Please know that my intention is always pure, and in this case, it was a mistake. I’m sorry.” 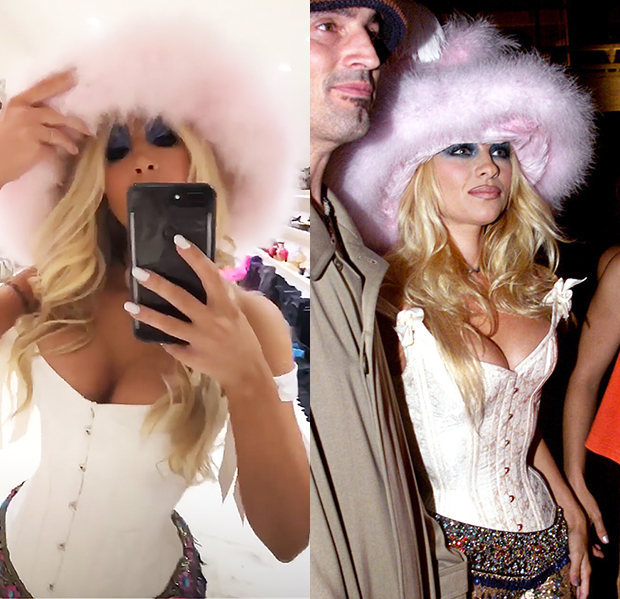 Kim made the remark in an Instagram stories video she shared from sister Kendall Jenner‘s Halloween party on Oct. 31. She and BFF Jonathan Cheban wore the exact same outfits Pam and then-husband Tommy Lee wore at the 1999 VMAs but a lot of people at the party were only born in that decade and were too young to remember it. Kim chastised them in the IG story, “Okay guys, we are Pam Anderson and Tommy Lee. Nobody knows who we are here! You guys are all too f**ing young. This is so sad,” she could be heard saying.

In another video Kim filmed bestie and former assistant Stephanie Shepherd praising her costume and recognizing who she was supposed to be. Kim responded, “Nobody knows who I am. Yeah! R****d.” The video became viral and fans pointed out that the word is highly offensive to those with special needs.