Did Jamie Foxx get down on one knee and we missed it? — Katie Holmes was photographed with a stunning diamond ring on her left hand, that’s sparked major engagement rumors! AND, we have the truth!

Katie Holmes, 39, got the rumor mill working overtime on Wednesday, October 31, when she stepped out with a diamond ring on her left hand! The actress was caught smiling wide as photogs captured her on a break from filming in New Orleans. But, it was that massive diamond ring on her left pinky finger that stirred up engagement buzz with her boyfriend, Jamie Foxx, 50. — BUT, we’ll all have to keep dreaming, because a rep for the actress says the ring was all part of her job.

“Katie’s not engaged to anyone besides her fictional movie fiancé, played by Jerry O’Connell,” her rep tells HollywoodLife.com EXCLUSIVELY. — There you have it. Katie is not wearing an engagement ring in the photos. Instead, it’s an accessory for her fictional character in a film she’s currently shooting. Katie is filming The Secret, based on the book of the same name, which centers around the impact of positive thinking.

Although the actress and singer are not engaged, they’re still going strong. In fact, Katie made numerous trips to Georgia in September, where she visited Foxx while he filmed his upcoming movie Just Mercy. The two were recently spotted on a bike ride, and they even hit the gym for a sweat session together. 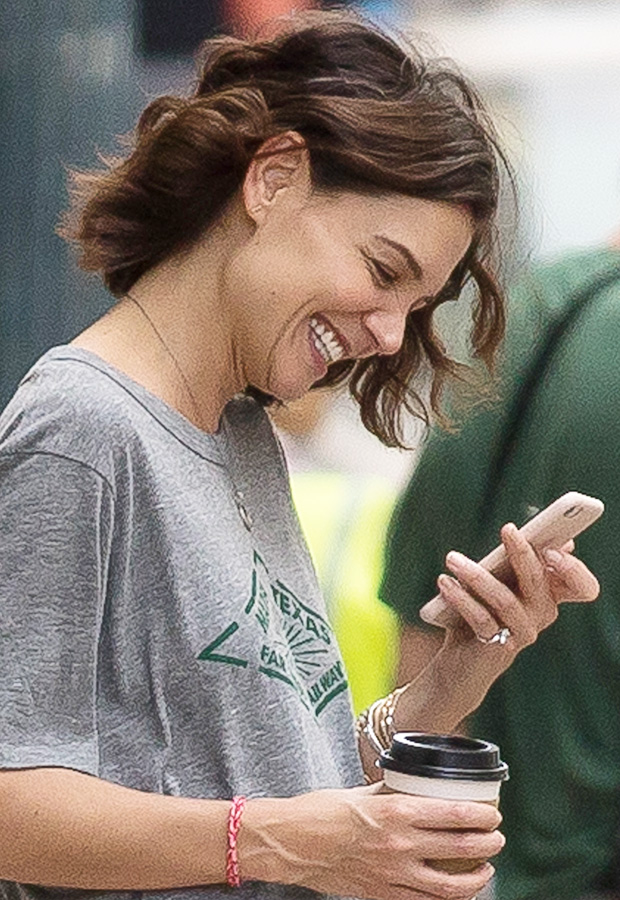 Katie Holmes grabs a coffee during a break from filming The Secret in New Orleans on Wednesday, October 31, 2018.

Katie and Jamie have been in a very private relationship for the past five years. While they were first linked together in August 2013, it wasn’t until September of 2017 that the couple decided to go public with their romance. Despite never verbally confirming their relationship, Katie and Jamie were photographed holding hands in Malibu that year, which marked the first time they stepped out in public as a couple since her split with Tom Cruise, 55.

The two were first seen dancing together in the Hamptons in 2013, one year after Katie split from Tom. Katie and Tom were married for six years and have one daughter together, Suri, 12.