While Kendall Jenner and Anwar Hadid play coy about their romance, the male model has put out a call for a woman to kiss his neck so her can have her lips tattooed on him. Is it a message for the reality star?

Anwar Hadid is showing a growing fondness for tattooing up his body and he’s adding some new ink. In an Instagram story he posted on Nov. 1, the male model is getting some new lines added down his back underneath his existing “1999” ink on the nape of his neck He apparently would like to have the new body art sealed with a kiss and asked for a volunteer….possibly rumored fling Kendall Jenner would be up for the job? The two have locked lips on several occasions so maybe she could plant one on his neck?

The 19-year-old wants a tattoo of a woman’s lips next to his fresh art and asked on an IG story pic, “YAYAYAY also I need a girl to kiss my neck with red lipstick so I can tattoo it on me,” celebrating the new ink while already plotting out his next tatt. Kendall seems to be familiar with his neck, a he appeared with a hickey on it after they went on a romantic dinner date during Milan Fashion Week in September.

Kendall and Anwar have been playing are they or aren’t they ever since June when it comes to public make out sessions. The two passionately kissed during a party for the CFDA Awards on June 4 and didn’t care who saw them, even though the soon to be 23-year-old model was still dating NBA star Ben Simmons at the time. They later had sexy kissing sessions during New York and Paris’ fall Fashion Weeks in September after Kendall and Ben split. 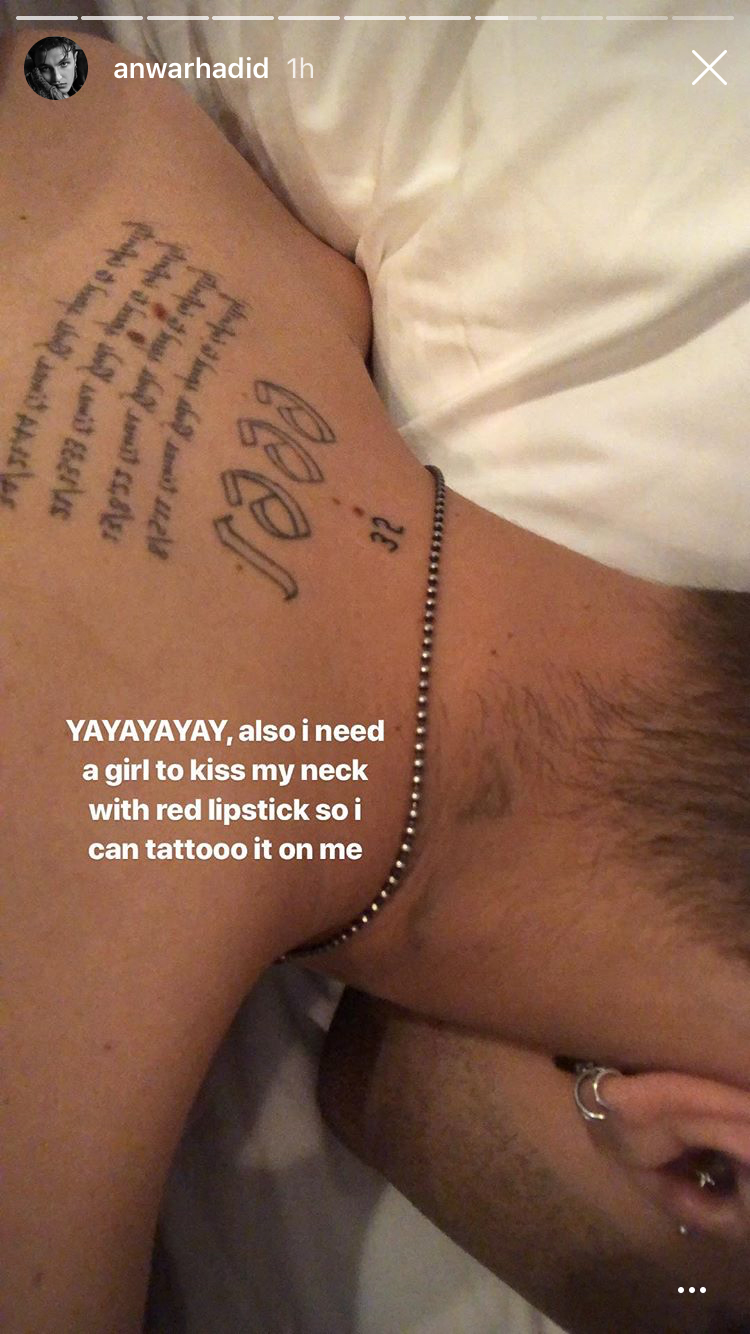 Anwar made the cut when Kendall threw an epic Halloween party at her LA pad on Oct. 31. The reality star dressed as a sexy witch, and her soiree seemed to be just for close friends and family only judging from Instagram videos of the event. That means Anwar is still deep within Kendall’s inner circle, as he posted some pics on IG stories from inside the bash. Meanwhile his older sister Bella, 22, was in New York crushing Halloween along with her boyfriend The Weeknd, 28, as they went to Heidi Klum‘s 19th annual costume party dressed as Beetlejuice and his bride Lydia Deetz from the classic 1988 film.