Kim Kardashian’s been busted with some Photoshop fails before, and now fans claim she gave herself a serious arm makeover for a photo holding daughter Chicago while topless.

Kim Kardashian did a mother and daughter photo shoot to promote her new KKW Beauty eyeshadow line, posing totally topless while cradling nine-month-old daughter Chicago West to her bare bosom. That nude part didn’t really upset fans, but folks could not stop talking about the Instagram pic where her arm appeared to be badly Photoshopped. There’s a  blurry section between her shoulder and elbow, and Kim appears to have been given a little more muscle tone that she usually sports with a strange cut-in curve to make the illusion of definition appear. The reality star has been busted for photoshop fails in the past and now fans are claiming she’s done it again.

“My heavenly baby! Showing off the new pink shadows in the Flashing Lights Collection wearing Flashy and High Key available at KKWbeauty.com,” Kim captioned the Oct. 26 photo. While many fans delighted in seeing the beautiful Madonna-like pose, a number of them couldn’t help but wonder why her arm seemed to have had post-photo work done. “Why does her arm look odd?” one person asked while another commented “The arm looks weird it’s hurting my eyes.” “What’s wrong with her arm?” another person questioned.

“Her arms look a bit photoshopped and that,” another fan noted while one claimed “It’s photoshopped. They’re trying to make her look as if her arms have muscle mass. But we all know she don’t work out work out.” One person got brutal, claiming “Definitely photoshopped! Nothing real about her…” Another pointed out “Someone deformed her arm bad.”

As if getting slammed for her oddly shaped arm wasn’t bad enough, others accused her of using her baby profit off of eyeshadow sales. “Using a child for make money …….. BEST MOM EVERRRR,” one fan wrote while another added  “What does a picture with your baby have anything to do with your eyeshadow… Nothing!!! Poor baby.” 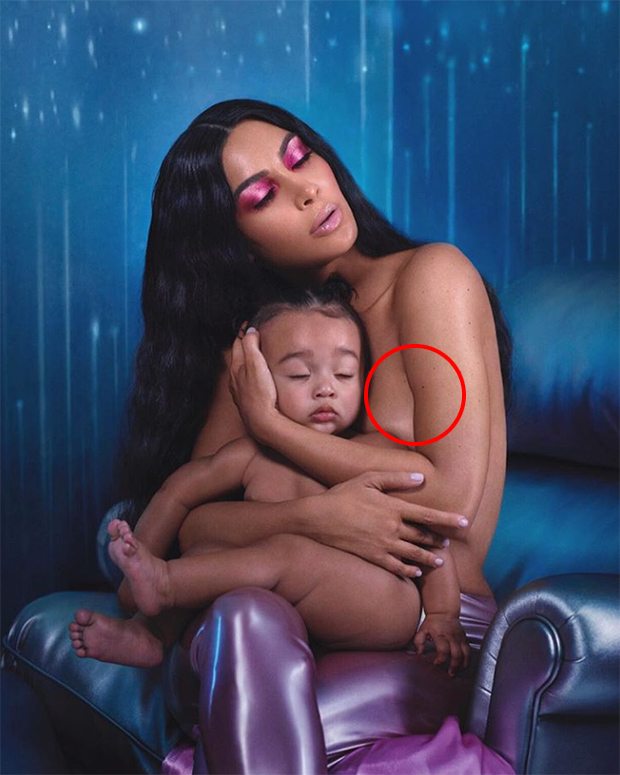 Her comments weren’t all haters though as many fans gushed over how precious her daughter is. “This baby is perfect. So so beautiful,” one KK fan commented while another said “Such sweet and warm moment, what a blessing to have Chi in this pic.” One person called the picture “iconic” and another complimented Kim that Chi “is literally your double.”