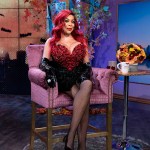 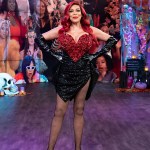 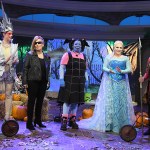 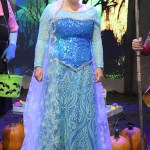 ‘Live With Kelly and Ryan’ did NOT disappoint this Halloween! Kelly Ripa and Ryan Seacrest’s ‘The Reboot’ reunited ‘All My Children’ stars Susan Lucci and Sarah Michelle Gellar and we haven’t witnessed anything greater!

Live With Kelly and Ryan always goes all out for Halloween! But this year, Kelly Ripa, 48, and Ryan Seacrest, 43, outdid themselves! As part of “Live’s Best Halloween Show Ever: The Reboooot,” hosts Kelly and Ryan threw it way back by reprising characters from their favorite TV shows. And, their studio audience and viewers at home got a surprise when Susan Lucci and Sarah Michelle Gellar showed up for an All My Children skit that completely won Halloween all together. Andy Cohen joined the All My Children reboot, as well as Eva LaRue, who reprised her role as Dr. Maria Santos.

Kelly and Ryan even “rebooted” other small-screen favorites including, Friends, Saved by the Bell, Top Gun, The Brady Bunch, Laverne and Shirley, Charlie’s Angels I Love Lucy and many more. Kelly’s husband, Mark Consuelos even joined in on the fun! The IRL actor played the part of Lucy’s husband Ricky. And, the fun didn’t end there! Kelly and Ryan were hysterical in the “Live”, Dawson’s Creek reboot. During the skit,Kelly and Ryan auditioned for the “reboot” with help from former “Creek” star, Busy Philipps.

The dynamic duo teased their numerous costumes for Live’s Best Halloween Show Ever: the ReBOOOOt ahead of the show, and it was clear that we would all be laughing. “I had to do a Spanx fitting,” Ryan said when Kelly stopped by his radio show on October 30. “You have only dated woman who don’t need Spanx so you have a false idea about what women are like,” Kelly teased. “Actual women wear Spanx.”

2 MORE DAYS! #Repost @bravoandy: The part of Mateo will now be played by... ME! #AMC is BACK on #LIVEHalloween this Weds! #Jackson #Hayley #Erica #Maria #Myrtle #PineValley #Live #ArtMoore

It’s safe to say — Kelly and Ryan are a “go big or go home” duo when it comes to Halloween. Last year, the hosts dressed as some of Hollywood’s hottest stars for their “biggest pop culture moments of the year”  theme. Kelly and Ryan reprised characters from Wonder Woman, Stranger Things and Handmaid’s Tale.