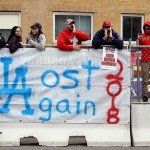 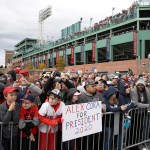 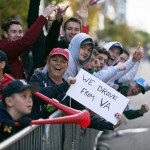 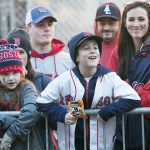 It’s a good day to be a Boston Red Sox fan! The World Series champs celebrated their championship win with a parade on Oct. 31, and you can see all the epic pics and videos here!

For the fourth time in 15 years, the Boston Red Sox are World Series champions, and they hit the streets of Boston for an epic parade to celebrate on Halloween. Thousands of fans lined the streets as the team made their way through the city, beginning around 11:20 a.m. The screams were deafening as the players celebrated their epic victory, waving to the crowd from duck boats (it’s tradition!) as confetti flew in the air. Click through the gallery above to check out a bunch of photos from the parade!

This World Series win marks the 9th in Red Sox franchise history. It was a dominant performance for the 2018 team, who beat the Los Angeles Dodgers in 4 out of 5 games, culminating with the big win on Oct. 28. Games one and two were home games for the Sox, and they won both with a score of 8-4 and 4-2. It was game three that made MAJOR headlines, though — the game went for a whopping 18 INNINGS, and lasted nearly seven and a half hours! The score was tied 1-1 after nine innings, then both teams scored a run in the 13th to tie it up again. Finally, the Dodgers broke the grueling spell by scoring a run in the bottom of the 18th on their home turf.

The lengthy game and loss didn’t get the Red Sox down, though — they returned to the Dodgers’ stadium for back to back wins on Oct. 27 and 28, winning 9-6 and 5-1. Since they didn’t get the World Series win at home, this parade is the perfect way for their hometown fans to help celebrate!

We’re at the rally & @ac13alex recaps the last at bat of the season! pic.twitter.com/ZPpQz7fLuT

The parade began at Fenway Park, took the team through the streets of Boston, and ended at Government Center. The whole thing is more than two miles long, leaving plenty of space for fans to line up and catch a glimpse of the 2018 World Series champs!