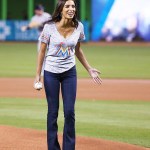 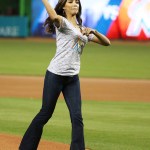 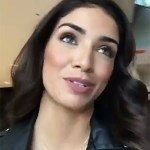 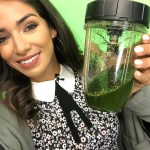 Olivia Culpo’s boyfriend Danny Amendola was spotted cuddling up to Bianca Peters in Miami over the weekend. Here’s what you should know about the local sports reporter.

Danny Amendola made headlines earlier this week after he was spotted chatting with Bianca Peters at a beach in Miami. At one point, he reportedly stroked her hair before they went swimming in the ocean together. So who is this woman that’s been hanging out with the Miami Dolphins wide receiver? Here’s what you need to know:

1. She met Amendola just a few hours before their Miami hang out. “Bianca and Danny had met the night before through mutual friends, an insider told Us Weekly. “All their friends met up at the beach on Saturday, [Oct. 27].”

2. She doesn’t plan on continuing a friendship with Amendola. “Bianca has no plans to hang out with Danny again. It was just a Saturday at the beach,” the source told the magazine. The insider also said, “I don’t think they hooked up.”

3. Amendola’s girlfriend, Olivia Culpo, was in Australia at the time. Culpo was working Down Under on a shoot for Sports Illustrated‘s swimsuit issue when her boyfriend was spotted cuddling up to Peters. The hang out prompted fans to speculate whether the pair had split up, although neither Culpo or Amendola has confirmed a breakup. The former Miss Universe tweeted “Wow” shortly after the news broke.

4. She’s an anchor for CBS4 Miami. She is a traffic and sports anchor for the Miami-based TV news station. Peters isn’t a Florida-native, though. She previously lived in Los Angeles, but knew at a young age that she eventually wanted to move to Miami. When she was introduced to viewers in 2016 after landing her current gig, she said, “When I came here when I was 17 years old, I remember saying, ‘I’m going to live here one day.'”

5. She’s a former beauty queen. Peters competed for the title of Miss Malibu 2010, and ended up winning the crown. She then went onto compete in the Miss California pageant, and placed amongst the top 10 finalists.