Notorious Boston mob crime boss and convicted murderer Whitey Bulger has been killed after being moved to a new high security prison in West Virginia. We’ve got the shocking details.

James “Whitey” Bulger, the infamous Irish-American Boston crime boss has been killed in prison at age 89. He infamously went on the run for 16 years before being captured in Santa Monica, CA in 2011, spending 12 of those years on the FBI’s Most Wanted list. On Oct. 29 he was relocated by the Federal Bureau of Prisons to its high-security penitentiary in Hazelton in West Virginia. He was serving two life sentences for the murders of 11 people was was said to be in failing health at the time of his killing. Bulger’s life story was made into the 2015 film Black Mass where he was portrayed by Johnny Depp.

The president of the union representing workers at the prison confirmed a male inmate was killed overnighte Federal Bureau of Prisons released a statement that said Bulger’s unresponsive body was discovered around 8:20am this morning and that “Life-saving measures were initiated immediately by responding staff. Mr. Bulger was subsequently pronounced dead by the Preston County Medical Examiner.” They did not release the cause of death.

Federal officials later confirmed Bulger’s identity on Oct. 30. Bulger rose to prominence in the 1970’s as the leader of South Boston’s notorious Winter Hill gang. He was accused of operating rackets that included extortion, fixing horse races, bookmaking, loan sharking and even arms trafficking. He had no qualms about bumping off his enemies or those he felt betrayed him and was believed by federal officials to have had a hand in 19 murders. He was eventually convicted in 2013 of 11 killings as well as  Racketeering Conspiracy, Racketeering, Extortion Conspiracy, Money Laundering, Possession of Unregistered Machine Guns, Transfer and Possession of Machine Guns, Possession of Firearms with Obliterated Serial Numbers, and Possession of Machine Guns in Furtherance of a Violent Crime. 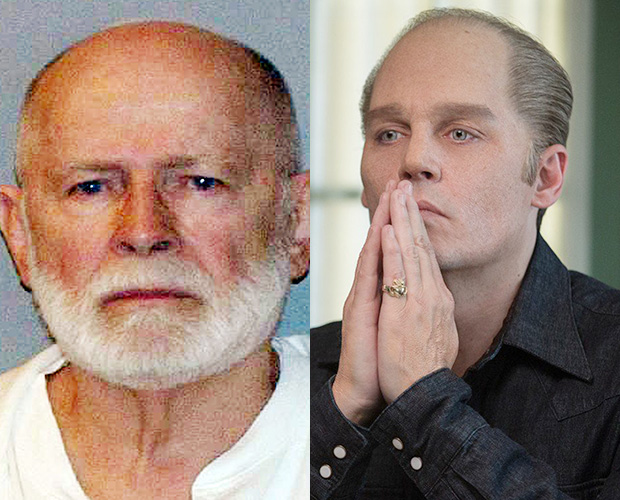 Depp earned accolades for his portrayal of Bulger in Black Mass, undergoing a massive physical transformation to play the balding gangster. Martin Scorcese‘s 2006 Boston mob drama The Departed was loosely based on parts of Bulger’s life, with Jack Nicholson‘s character of Francis “Frank” Costello being the fictional version of the real Boston crime boss. Bulger’s life was also examined in the 2014 documentary Whitey: United States of America v. James J. Bulger.

Development is also underway on a scripted miniseries based on Bulger’s trial. Steve Davis, who believes his sister Debbie died under Bulger’s orders tells the production company Not A Billionaire that  “I’m glad that the prIck is dead and in a body bag. No tears shed for him. I do have some mixed emotions, because while I’m jumping for joy that the evil bastard is dead, his demise brings back memories of my sister, Debbie, who I know he had a hand in killing.”