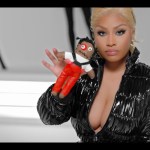 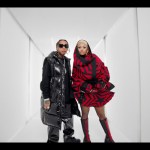 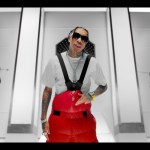 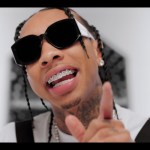 Tyga may have been in a down mode musically after his 2017 split with Kylie Jenner. However fans are rediscovering his talent with the rapper’s new song ‘Dip’ featuring Nicki Minaj.

For awhile there people couldn’t name a single song by Tyga, but knew who he was thanks to being Kylie Jenner‘s former longtime boyfriend. The 28-year-old rapper is finally coming into his own as a talent, which most of the hip hop community was already aware of but is now being revealed to the general public. He dropped the song “Dip” featuring rap superstar Nicki Minaj, 35, on Oct. 29 and he’s at last getting the musical recognition he’s long deserved. Fans going nuts for the tune on Twitter.

T-Raww also dropped a sexy video that feature Nicki at her buxom best. She’s seen in a sexy red and black stripped bodysuit that shows off her tiny waist, toned legs and amazing booty. She has her hair short and sleek, slicked back in a blonde bob. Nicki even plays with a miniature Tyga like he’s some kind of toy or voodoo doll and fans can’t get enough of it!

“How’d Tyga just make a comeback on all our ass?! Like he really just popped back up making BANGERS,” one fan tweeted. Another added, “Who would’ve thought that Tyga……TYGA…after all the sh*t that happened between them…. would be a real n***a to Nic while all the n***as we thought were real….. fraudin. Still blows my mind.” One fan noted, “Tyga has managed to evolve, yet retain his sound. I’m glad he’s gotten back to the place he’s in now because for a good while the sound wasn’t there.”

Tyga all out that sunken place back to dropping hits

Nicki even gets in a dig at Drake and his “In My Feelings” hit during “Dip.”  “All these n***as want me to love ‘em like I’m KeKe//Got em in they feelings since they seen me in FEFE,” referring to her sexy song and video with Tekashi 6ix9ine. She gave Tyga tons of praise about their song on her Oct. 29 Queen Radio podcast where Nicki told him “Your bars are better than a lot of n***as.” Check out the video above to hear their new collab!