Just when we thought Prince Harry and Meghan Markle couldn’t get any cuter, the royal revealed the sweet name he calls their little one. Take a look!

Meghan Markle, 37, and Prince Harry, 34, won’t welcome their first child until the spring — but Harry has already given it a nickname! That’s right, in an Oct. 29 speech at the Abel Tasman National Park in New Zealand, the royal affectionately referred to his firstborn as “our little bump.” Aw! “From myself and my wife and our little bump, we are so grateful to be here,” he said. “We bring blessings from my grandmother the Queen and our family.” That has a nice ring to it, don’t you think? Unfortunately, a nickname like this doesn’t clear up whether or not Meghan and Harry are expecting a boy or a girl, which is the question everyone is dying to know the answer to!

Maybe Meghan’s outfits can give a little bit of a clue? Since she and her husband are on their first royal tour, the two have stepped out in one outfit after another. Meghan, with her baby bump on full display, has in fact worn a couple of blue dresses, but no pink yet! If this couple is anything like Kate Middleton, 36, and Prince William, 36, though, they’ll keep us waiting to find out the sex and name of their baby until the very last minute. But we aren’t complaining — half of the fun of a royal pregnancy is in the guessing! As long as Meghan keeps showing off her adorable baby bump and pregnancy glow, that’s enough for us.

After months of speculation, Meghan’s pregnancy was confirmed on Oct. 15. “Their Royal Highnesses are very pleased to announce the Duchess of Sussex is expecting a baby in Spring 2019,” a Kensington Palace statement read. “Their Royal Highnesses very much appreciate all of the support they have received from people around the world since their wedding in May and are delighted to be able to share their happy news.” 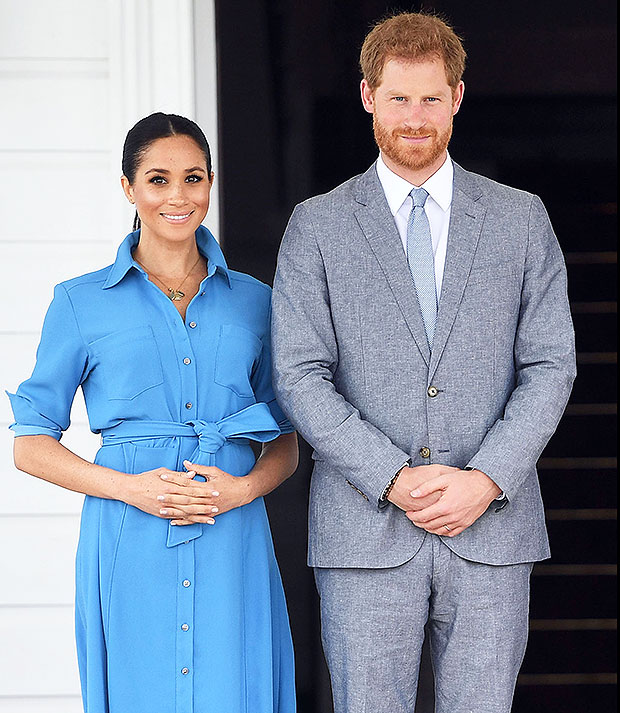 Meghan has made her excitement clear by cradling her budding belly nonstop on the royal tour, and Harry’s adorable nickname proves that he’s just as thrilled to grow their family!