Hot mama! Kylie Jenner is twinning for Halloween with daughter Stormi in a gorgeous pink butterfly costume. We’ve got the adorable mommy and me pics.

This has got to be the sexiest butterfly ever! Kylie Jenner is showing off her famous curves in a tiny pale pink bodysuit with matching butterfly wings for her latest Halloween getup. The 21-year-old initially just shared pics of herself in the outfit on Oct. 29, which looked painted on to her tiny waist, killer bust and famous derriere. Then she melted all of her fans’ hearts by showing off that she was matching her costume to her nearly nine-month-old daughter Stormi Webster. Baby daddy and BF Travis Scott is officially the luckiest man on Earth to have these two cuties in his life.

Ky shared the initial Instagram pic of her in the racy bodysuit while sitting on her bed, with her black and pink wings resting on her white bedspread. She showed off matching high heels with intricate strapping that had a pink butterfly where the laces finally ended halfway up her calf. She then gave fans a peek at her full on look, standing up and posing for a boomerang video that showed off her flawless figure.

Then Kylie reminded fans that she is a mother to an infant, posting a pic crouched on the ground with daughter Stormi on her knee wearing a matching butterfly costume. “My baby butterfly” the proud mom captioned the Instagram pic. Stormi has an adorable smile on her face as her loving mama simply beams at her daughter. Kylie then shared a pic of just Stormi sitting up on the bed with her pink onesie and wings on. Oh man her little girl is adorable. 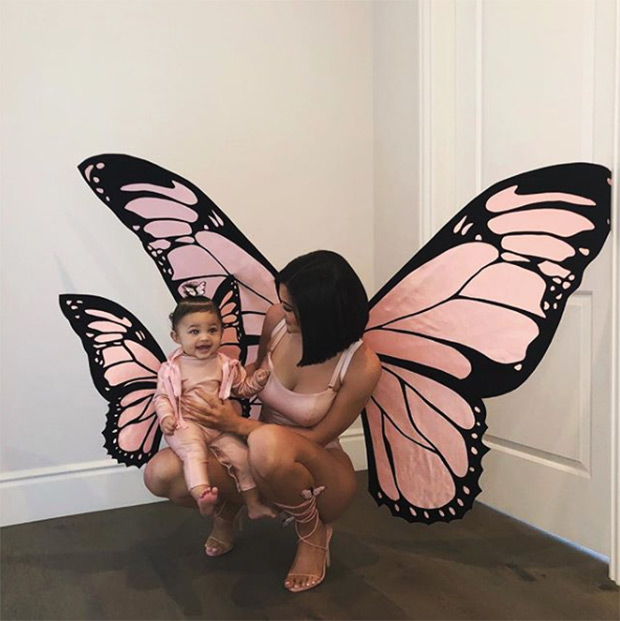 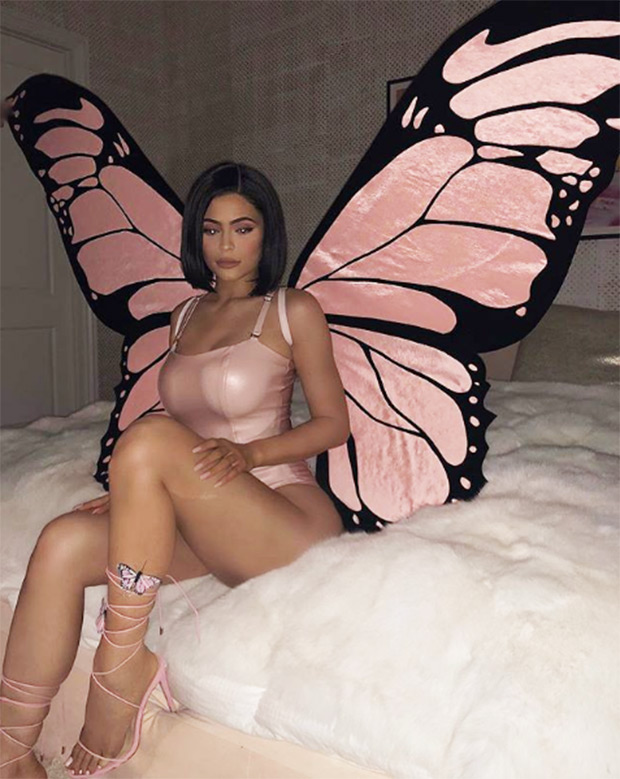 It’s pretty impressive that Kylie would want anything to do with a butterfly since she’s admitted in the past that she’s terrified of them. In a 2017 episode of E!’s Life of Kylie, she confessed “Butterflies are just a part of the secrets of Kylie,” after a visit to the London Zoo’s butterfly exhibit  “It’s kind of just ironic because I’m terrified, terrified of butterflies. All butterflies.” She added, “This is how I think of them, cut the wings off and if you just look at their bodies, they’re not that pretty. It’s literally a bug.”

Ky has warmed up to butterflies though. Travis has an album called Butterfly Effect and ever since she started dating him in May of 2017 she’s been more accepting of the “bugs” The reality star got a butterfly tattoo and Travis gave her butterfly-themed bling for her 20th birthday including a gold choker necklace with five diamond encrusted monarchs and two rings featuring diamond and sapphire covered winged creatures.