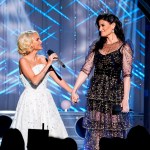 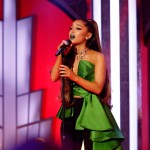 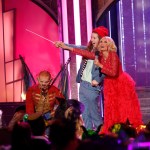 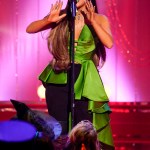 Millions of fans love ‘Wicked’ & while preparing to celebrate the musical’s 15th anniversary, OG stars Idina Menzel & Kristin Chenoweth talked with HollywoodLife on the impact of the show in 2018.

It’s been two years since Idina Menzel and Kristin Chenoweth last performed a song from Wicked together, but on October 29th, the women who originated the roles of Elphaba and Glinda in the smash Broadway show will come together for NBC’s special presentation, ‘A Very Wicked Halloween: Celebrating 15 Years On Broadway’. It is a rare chance to see these powerhouse performers reunite, but also a reminder that such a positive, empowering, and enchanting show is still thriving and making an impact on audiences, namely women, around the world. In fact, both women agreed when I spoke to them, that the show’s true magic comes from the powerful message that perhaps carries more weight in 2018 than ever before.

“Oh, it’s probably even more important these days,” Idina shared EXCLUSIVELY with HollywoodLife.com at a junket held by NBC. “It’s such a celebration of women supporting women; of owning who we are, of not being afraid of that thing in us that’s really fierce and powerful. Of being strong, and that that’s not ugly or angry. That it’s just beautiful.” Kristin wholeheartedly agreed. “It’s a common theme,” she added. “It’s called Wicked, but it’s like  — which one’s wicked? Who’s good? You’re still trying to figure it out, and you see both sides. You can understand both sides to both stories.”

Though the show will surely continue to be a bright beacon for female unity for generations to come, Idina and Kristin admitted they didn’t know that when they started. They just knew they were starting something special. “Definitely when we opened in San Francisco,” Kristin shared, when I asked her which moment really defined her Wicked experience. “I was waiting for that first audience reaction, and the anticipation of that was killing me! And once we finally opened, I just practically popped a champagne myself, like just alone in my dressing room. I was like, ‘I knew it!’ That’s a pretty great moment.” For Idina, it was her callback for the role of Elphaba that sticks out for her. “I had to learn ‘Defying Gravity’ for my callback,” she shared with reporters about the first time she sang the song. “I felt like crying when I sang it. Honestly … it moved me. I knew that it was special in some way. I didn’t know it would become the phenomenon that it’s become, but I knew that it was something that I needed to do for my life, in my life.”

Thankfully, the world will be moved again when Idina sings the iconic song for the special, while Kristin will be belting out the classic “Popular”. [Watch snippets above!]  The two woman have so much to celebrate, even beyond the show, as because of it’s fame, both have been able to inspire and guide the next generation of performers with their charities.  In 2010, Idina launched A BroaderWay Foundation that provides programs like Camp BroaderWay and year round school outreach program that includes workshops and mentoring to girls in urban communities. Kristin formed a charity partnership with the Broken Arrow Performing Arts Center (BAPAC) Foundation in her home state of Oklahoma in 2015, launching the annual Broadway Bootcamp that provides mentoring and classes for young Broadway hopefuls.

Along with Idina and Kristin, guest performers include Ariana Grande, who teased she’d be singing “The Wizard & I” on Instagram just last week, Pentatonix, Adam Lambert, and the current Broadway company of Wicked. A Very Wicked Halloween premieres tonight, Monday Oct. 29th 10pm/9c on NBC.