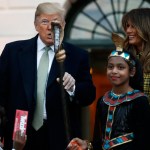 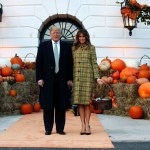 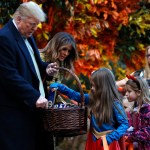 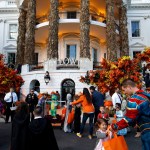 While giving out candy to trick-or-treaters in front of the audience, Donald Trump borrowed a plastic snake staff from a kid & seemed to wave it at the press, as Melania laughed.

During the White House’ annual Halloween trick-or-treat event where children get to ask the president for candy, Donald Trump did something pretty peculiar (shocking, we know). While meeting a young girl dressed up as a pharaoh, Donald borrowed the girl’s Cobra staff that was part of her costume and waved it in the direction of the media, according to the Daily Mail. Then he was caught on camera asking, “Do you know what I’m doing?” Well, as a result, many people Twitter jokingly responded with what it looked like he was doing: casting a spell on the news media.

One Twitter user @wonderfullone wrote, “More proof the Dotard Moron Trump is Cray Cray. Birther Bish Moolania chuckled as he waved the staff with the serpent on it. Real funny like a heart attack! Both Tone Deaf POS deserve one another!” Another tweeter @aamanlamba saw a resemblance to Jafar’s staff from Aladdin, writing, “no coincidences – The Staff of Jafar – hypnosis.”

Recently, Caitlyn Jenner admitted that she was wrong to support Trump despite being hopeful at first.  “Following Trump’s election as president, I saw fertile ground for change within the Republican Party on LGBTQ issues,” she wrote in an op-ed for the Washington Post. “Trump was the first Republican presidential candidate to claim to support this valuable, vulnerable community, and I was encouraged by the applause he received when he said at the Republican National Convention in July 2016 that he would stand up for the LGBTQ community. Poll after poll showed that Americans’ views on LGBTQ issues were changing for the better — and that this groundswell extended even to the voter base of the Republican Party. I was optimistic that this was how I could leverage my privilege for change. Sadly, I was wrong.”