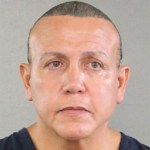 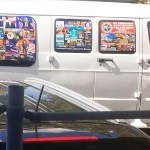 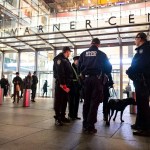 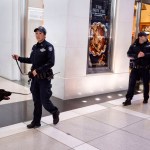 The FBI confirms that it has arrested a male suspect, Cesar Sayoc Jr., in connection with the 12 suspicious packages sent to Democratic leaders. Here’s what we know so far.

UPDATE 5: Christopher Wray revealed that each of the 13 IEDs mailed to prominent Trump critics were made from six inches of PVC pipe, a small clock, a battery, wiring, and “energetic material.” He described that material as “potential explosives and material that give off heat and energy through a reaction to heat, shock or friction.” Some of the packages also included photos of the intended recipients marked with a red “X”. Former President Obama’s first name was misspelled “Barrack,” Hillary Clinton’s was spelled “Hilary,” and Maxine Waters’ name was named “Maxim.”

UPDATE 4: the Department of Justice held a press conference at 2:30pm ET after Sayoc’s arrest, with Attorney General Jeff Sessions stating that the suspect will be charged with five counts, including of illegal mailing of explosive, threats against former presidents and other persons, and assaulting current and former FBI agents, among other charges. He could face up to 58 years in prison. “This is utterly unacceptable,” Sessions said. “Political violence or the threat of violence is antithetical to our vigorous system of self-government.” He said that it wasn’t clear at this point if the attacks were partisan. ““He may have been — appears to be partisan, but that will be determined by the facts as the case goes forward. I’m not able to comment on that.”

Director of the FBI Christopher A. Wray said at the press conference that the bureau is still analyzing the bombs at Quantico, but emphasized that they are “not hoax devices.” The FBI lab found a fingerprint matching Sayoc on one of the envelopes, containing an IED, sent to Representative Maxine Waters. He stressed that today’s arrest does not mean we’re “out of the woods;” other bombs could still be in transit.

UPDATE 3: President Trump addressed the suspect’s arrest in a speech before an unrelated event at the White House, condemning the attacks and thanking law enforcement for their speedy work. “These terrorizing acts are despicable and have no place in our country. We must never allow political violence to take root in America. Cannot let it happen. I’m committed to doing everything in my power as president to stop it. To stop it now. Stop it now.

“The bottom line is that Americans must unify. We must show the world that we are united together in peace and love and harmony as fellow American citizens. There is no country like our country and every day we are showing the world just how truly great we are,”

Two hours prior to this statement, he tweeted out: “Republicans are doing so well in early voting, and at the polls, and now this ‘Bomb’ stuff happens and the momentum greatly slows – news not talking politics. Very unfortunate, what is going on. Republicans, go out and vote!”

UPDATE 2: Cesar Sayoc Jr. has been named as the suspect. His van had dozens of pro-Trump, anti-democrat, and anti-media stickers covering the windows of his white van, as well as pictures of Trump and Vice President Mike Pence. Armed FBI agents were seen covering the van with a tarp and loading it onto a tow truck following the arrest. Some of the images on his van were incredibly disturbing, showing critics of Trump, like filmmaker Michael Moore, Hillary Clinton, and more with crosshairs over their faces.

You can see a photo of the van below. Sayoc Jr. is originally from Brooklyn, NY. Public records show that he has a history of arrests for battery, theft, moving violations, and steroid-related charges. DNA evidence played a role in finding him.

UPDATE 1: The suspect is a 56-year-old man who has a criminal history, according to law enforcement officials. He has an Aventura, Florida address, and reportedly has ties in New York. The man, who still remains unnamed, was arrested at a business in Plantation, Florida, a suburb of Miami. The suspect was tracked down using a cell phone. Authorities recovered a cell phone, a laptop computer, and other electronic devices from the suspect, law enforcement sources told ABC News.

ORIGINAL: A Florida man has been arrested in south Florida in connection with the series of suspicious packages, suspected to be mail bombs, sent to Democratic leaders and critics of President Donald Trump on October 22 through 26, multiple sources told CNN. The suspect, who remains unnamed at this time, is believed to be in his 50s, and lives near a facility which the packages were mailed through. It remains unclear if the suspect worked alone or had help. Department of Justice spokeswoman Sarah Isgur Flores confirmed that one person was in custody, and said authorities will hold a press conference about the arrest in Washington, DC, at 2:30pm ET on Friday.

The arrest comes just hours after two more suspicious packages were found. One was intercepted in New York City at a postal facility. It was addressed to former Director of National Intelligence James Clapper and CNN and resembled the 11 other explosive devices sent to the network and prominent Democrats. Another suspicious package was intercepted in south Florida, addressed to New Jersey Senator Cory Booker. None of the suspected pipe bombs have detonated, and have all been taken to the FBI’s lab in Quantico, Virginia for analysis.