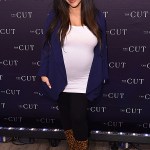 Snooki is known for flooding her social media with adorable pics of her two kids, so it’s no surprise to hear that the ‘Jersey Shore’ star now wants to have a third baby and she may be in luck!

Nicole “Snooki” Polizzi, 30, is ready to become a mom again! The Jersey Shore: Family Vacation star, who is known for flooding her social media accounts with adorable photos of her two children, Lorenzo, 6, and Giovanna, 4, “desperately wants” to add another kid to the brood she shares with husband, Jionni LaValle, 31. And although Snooki recently revealed she’s been having trouble welcoming baby No. 3, a source EXCLUSIVELY tells HollywoodLife.com that the reality star may be showing off a baby bump sooner than expected! The insider said, “Snooki is trying very actively right now for baby number 3. She may even be pregnant right now, though she hasn’t told anyone yet.” OMG!

“She desperately wants to be a mom again and will finally feel like her family is complete,” the pal added. “It’s all she really talks about right now. She’s having a lot of fun trying with Jionni!” Fans have already seen what an incredible mother the Dancing With the Stars alum is and we think it would be adorable for her to add another little “Meatball” to the family! And while Snooki may already be pregnant, she explained in an Us Weekly interview published on Oct. 1 that she was having trouble conceiving. “We’ve actually been trying for two months now and it’s not happening,” she said. But the reality star is not stressing one bit and dished on her plan of action. “So I’m just gonna relax,” she told the outlet. “If it happens, it happens.”

In addition to a possible bun in the oven on the rise, Snooki has much to look forward to with the celebration of her four-year wedding anniversary next month. She has also been celebrating her costar, Deena Cortese‘s pregnancy, and dished to the publication a few tips she shared with her BFF. “I’m like, ‘Girl, don’t indulge in everything,’” she advised. “With [Lorenzo] I ate everything, and it took me a year to lose the weight.” But the “A Shore Thing” author learned from her mistakes the second time around. “I treated myself once a week and I still worked out and I lost the baby weight in two weeks,” she explained of her second pregnancy with Giovanna. “If you splurge once a week, and don’t do it every day, it’s not going to be that hard to get your body back.”