Some stars pull out all the stops on Halloween and Rihanna, 30, Beyonce, 37, and Nicki Minaj, 35, are no different! These artists have more in common than just making great music — all three of these singers also have a tendency to crank up the sex appeal on Halloween. Take Nicki, for instance. While the “Barbie Dreams” singer hasn’t made a big deal out of very many Halloween costumes, who could forget the time she dressed up as a police officer and asked who wanted to be “cuffed?” Nicki left very little to the imagination in that ‘fit, which featured black pasties, fishnet tights and thigh high boots. And her fairy princess costume? It was definitely just as sexy.

So how do RiRi and Queen B stack up? Both of the artists seem to put a ton of thought into their crazy complex costumes. While Beyonce has dressed up with Jay-Z, 48, and Blue Ivy, 6, as a Barbie doll and Salt-N-Pepa, she isn’t afraid to go out on her own. She once wore not one, but FIVE, outfits inspired by Lil Kim. Her tribute to the singer included looks from magazine covers, music videos and tours. And while Rihanna hasn’t publicly dressed up nearly as many times, she can be just as epic. From green body paint as a Ninja Turtle to a marijuana bouquet as the bride of Mary Jane, she isn’t afraid to accessorize. That’s how she brings her costumes to the next level!

Picking a Halloween queen between these three ladies is like trying to choose between their albums. No thanks! We’ll take them all, please. 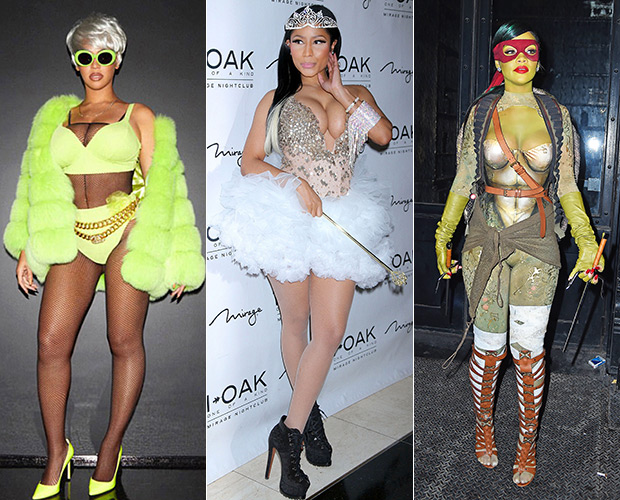 But you don’t have to be a musician to make an impression in Hollywood on Halloween. Stars like Vanessa Hudgens, 29, and Kim Kardashian, 38, have both proved that to be true with their long line-ups of sexy Halloween looks. We can’t wait to see the costumes all of these stunners debut this year!