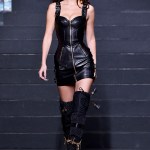 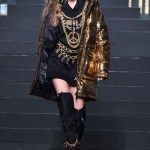 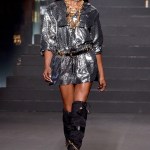 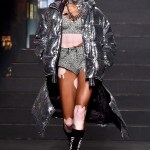 All three Hadid models were on the runway for the Moschino x H&M show in New York on Oct. 24. See Gigi and Bella’s super sexy looks right here!

For her look, Bella slayed in a tight, sexy black leather mini, which truly fit her like a glove! It had gold zippers and buckles and highlighted her curves to perfection. She paired the mini with thigh-high black boots. Her hair was in super pretty, voluminous waves — a slightly retro beauty look that was just so pretty. Gigi went a little more punk, wearing a black sweatshirt with gold “chains” and a gold “belt” emblazoned on the front. She wore giant gold peace sign earrings and rocked the same black thigh-high boots as Bella.

On top of her sweatshirt, Gigi wore a massive gold puffer coat, that was covered in sequins and so shiny in the lights on the runway. Both sisters looked amazing from head to toe!