Cardi B, 26, looks incredible just three months after giving birth to her daughter, Kulture! In fact, her post-baby body (aka, her amazing abs) looks so good that some online critics are accusing the “Ring” rapper of undergoing plastic surgery, specifically liposuction. But, she took to Instagram to slam those rumors in the most epic way. “I never did lipo bro, no,” Cardi declared in a video on Instagram, October 24.

The new mother took the time to address the outlandish assumptions while on a quick break during rehearsals. Cardi showed off her toned tummy in the mirror, when she confidently denied the speculation about her body. And, if there’s one thing Cardi’s known for, it’s how she always keeps it real. So, we see you, Cardi, and we think you’re looking good, girl!

While Cardi’s tummy is au naturale, she’s previously admitted that she’s not afraid to go under the knife when it comes to her breasts after birth. The rapper took to Instagram to tell her fans that she had to tape her breasts because of pregnancy. “I have to f–king tape my titties up because son,” she said in a video showing her breasts being held up with silver duct tape. She went on to explain how she originally had gotten her breasts done when she was 19-years-old. “Giving birth and sh-t, my titties was already a little low low because I got my tits done when I was 19 and I never wore a bra and sh-t.” 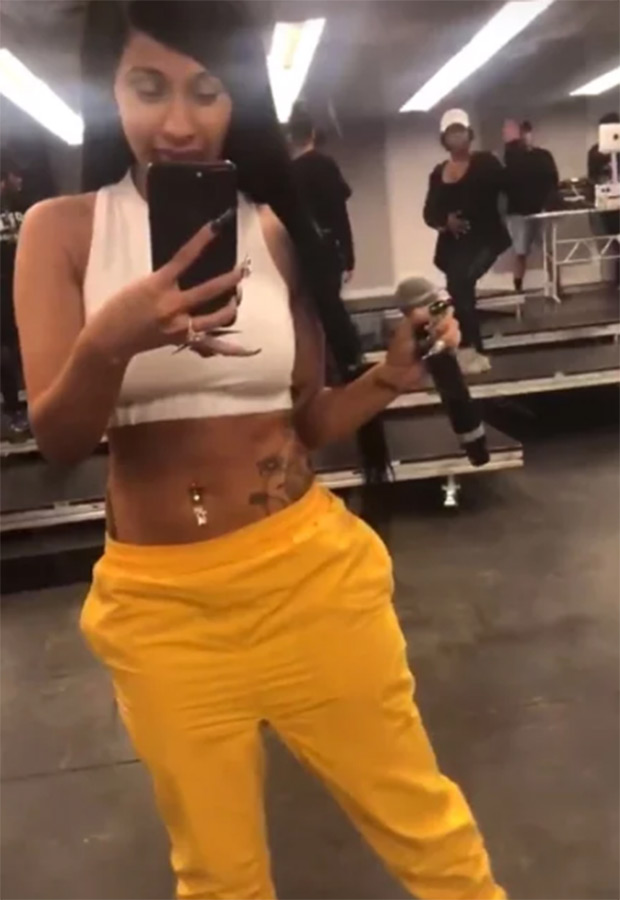 Cardi B shows off her post baby body abs during rehearsals on Wednesday, October 24.

Cardi also added that she loved her breasts while she was pregnant, but now, its a different story. “Now, though, Kulture did me filthy,” she said in the video. “I don’t give a f–k. If ya’ll see me gone in November, December, I’m going to get my tits done… Matter of fact, I’m not even gonna call it surgery. I’m gonna call it a ‘titty renovation’ because I gotta renovate these sh-ts.

Cardi, who just celebrated her 26th birthday on October 11, recently asked other moms online about dealing with post baby body changes. “Ladies how do you guys get rid of the black line in the middle of your stomach after giving birth?? cause bitch,” she captioned a photo of herself in a black tracksuit and sports bra, baring her tummy on October 20.

While Cardi expected the changes and challenges that come with post pregnancy and breastfeeding, she never anticipated childbirth would rip her vagina. “She broke my vagina,” Cardi said about her daughter, Kulture, during an appearance on Jimmy Kimmel Live! on October 17. “Why nobody tells you about those things?”

She continued: “Nobody told me they were going to stitch my vagina,” Cardi said. “People just be like, ‘Oh, you know, when you give birth, it’s gonna hurt,’ but nobody tells you that like your vagina.”