So much for Samantha Markle’s truce with sister Meghan Markle. Now she’s calling pants on fire to the Duchess of Sussex’s claims that she put herself through college at Northwestern, while Sam says their dad paid all her bills.

Meghan Markle has fired up her half-sister Samantha again by stating that she put herself through college at Northwestern University through work-study and financial aid. Sam has maintained that their father Thomas Markle, 74, spent a fortune on Meg’s education, from the time she was in elementary school at LA’s exclusive Little Red Schoolhouse to her high school years that the private Catholic school Immaculate Heart. Sam says that her dad also paid for her expensive tuition to the Chicago area university and is calling out her royal sister for lying about her college fee plight. She also claims to have the receipts to prove Meghan, 37, is lying!

Sam took to Twitter on Oct. 24, a day after Meghan’s speech as she announced  new grants for the Fiji National University and the University of the South Pacific on her royal tour with husband Prince Harry. “Dad paid her college tuition! She forgot the most important part of her speech and there are receipts to prove it,” she wrote, adding “I love my sister but this is ridiculous. You can’t lie like this, Meg! Delusionally absurd.”

“Our father paid for her education. This speech is not true,” she added on Twitter and forwarded the message to Harry’s older brother Prince William, 36. In an Oct. 23 speech in Fiji, Meghan told a crowd of graduating college students that “As a university graduate, I know the personal feeling of pride and excitement that comes with attending university, from the moment you receive the acceptance letter to exams you spend countless late nights studying for.” 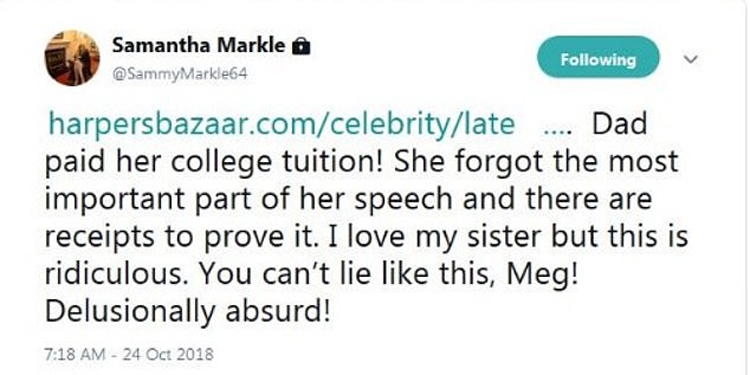 “I am also fully aware of the challenges of being able to afford this level of schooling for many people around the world, myself included. It was with scholarships, financial aid programs and earnings from a job on campus that went directly towards my tuition that I was able to attend university and without question it was worth every effort,” Meghan added.

Meghan’s family members have always said that her dad used part of his $750K from a lottery win to give his daughter the higher education of her dreams. Thomas repeated his claims that he paid for Meghan’s $30K per year Northwestern tuition and expenses in an interview with the Daily Mail on Oct. 21. Sam had called a truce with Meghan on Oct. 1, saying that her ongoing disses were just because she was upset over not being invited to her royal wedding but their feud is definitely now on again.