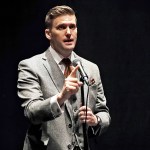 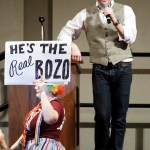 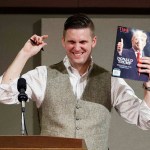 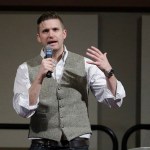 Richard Spencer’s estranged wife, Nina Kouprianova, is accusing him of horrific physical abuse in divorce filings that have just been made public.

Richard Spencer, 40, the poster boy for the modern white supremacist movement, is being accused of physically and emotionally abusing his estranged wife, and she details the gruesome allegations in a 78-page court document. Nina Kouprianova (whose name is also spelt Koupriianova) made the shocking claims in divorce proceedings that have now been made public, thanks to an Oct. 23 article published by BuzzFeed News. In court papers filed in Flathead County District Court in Montana she accused her husband of eight years of being “physically, emotionally, verbally and financially abusive,” according to BuzzFeed.

The night after Donald Trump proudly declared himself a “nationalist” at an Oct. 22 political rally in Houston, Texas, the most famous white nationalist in the country has been accused of horrific abuse. Nina – who has two young children with Richard – described “being hit, being grabbed, being dragged around by her hair, being held down in a manner causing bruising and being prevented from calling for help.” These are allegations that her ex denied explicitly in his written response to her divorce filings, saying that he “denies each, every, and all allegations.”

Nina went even further in her divorce filings, by alleging that her estranged husband’s behavior would get worse when his “alcohol consumption” increased. Booze, she said, “contributes to his aggressive and erratic behavior and reduces his impulse control.” She described one Jan. 2011 incident in particular when she claimed that Richard lashed out at her, when she “was very sick with the stomach flu” and she wanted to “stay in bed recovering,” rather than going downstairs to watch a movie with him. “He dragged me out of bed by my arms, legs, and hair, dragged me down the stairs, and threw me onto the couch,” she alleged. “At that point he calmed down and turned on his movie. The incident resulted in bruises.”

Nina included print outs of text message and email exchanges with Richard that she claimed prove her allegations. In July 2014, when she was four months pregnant he held her by her “neck and lower jaw,” she said. During an email exchange she told him “I am not ready to converse with you after what you’ve done. My jaw is bruised.” He responded, “I understand. I’m sorry, and I feel terrible.” They have been living apart since July 2017, the month before he led a torchlight march of fellow white supremacists in Charlottesville, Virginia.

HollywoodLife has reached out to both Richard Spencer and Nina Kouprianova. Neither of them has responded to our request for comment.