Jennifer Aniston, 49, is ageless! The actress stunned in a curve-hugging black dress at the 2018 InStyle Awards in LA. Aniston sported a fresh face with her signature poker straight hair — which gave us major Rachel vibes. The actress, a former InStyle covergirl herself, was on hand in to present the Hairstylist of the Year award to her very own hair guru, Chris McMillan. While she praised her good friend and hairstylist in her speech, she also took us back in time. Aniston told a story about when McMillan gave her “The Rachel” cut, from Friends.

“You leave, you feel beautiful, you feel sexy you feel alive,” she said, describing the feeling of leaving after a “McMillan cut.” — “Then you feel screwed, because nobody has the ability to actually do what Chris did to this haircut. I used to call it the Rachel hair, because I got that haircut, that was like, ‘Wow this is amazing,’ and then I was totally left with this frizzy mop on my head, because I had no idea how to do what he did. Nobody seems to know how to do what Chris does.”

Aniston also explained that McMillan isn’t only her hairstylist. “I am here tonight because I get to talk about my dearest friend, my brother from another mother, my husband that will never marry me because he’s gay, but maybe — there have been movies bout that — Chris McMillan,” Aniston gushed. “I just have a few things to say about you: You’re one of the most passionate and kind human beings that I’ve had the good fortune of getting to know and I get to call you my family. I feel blessed every day for that. We’re going on almost 25 years together, which is shocking to me.” 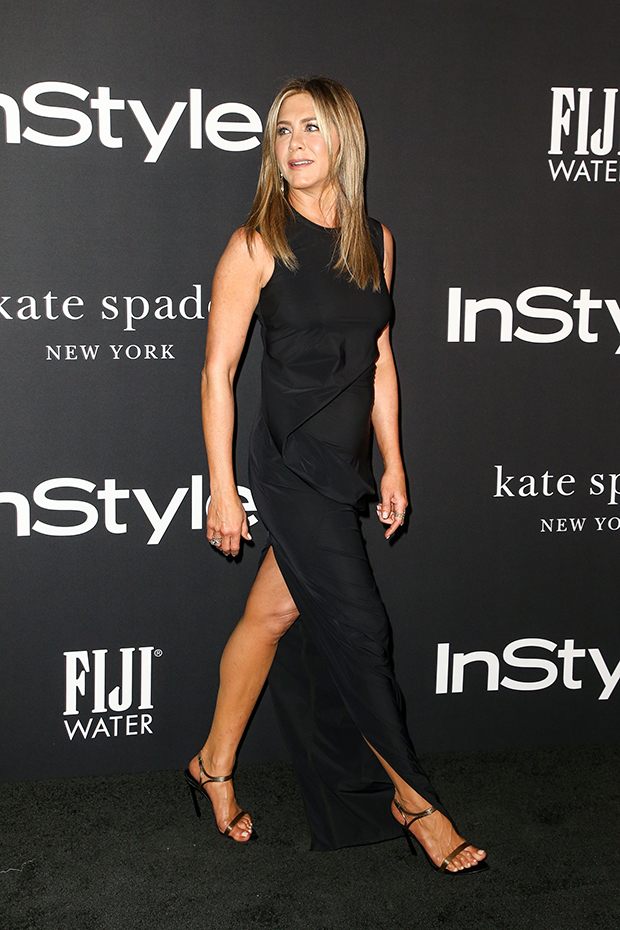 Jennifer Aniston on the red carpet at the 2018 InStyle Awards on Monday, October 22 at the Getty Museum in Los Angeles.

Aniston’s appearance at the annual awards show came after she was recently spotted filming in Milan with Adam Sandler at the end of August. The two, who play a couple on-screen, were photographed holding hands while filming their forthcoming Netflix comedy, Murder Mystery.

The actress has been keeping busy after her divorce from Justin Theroux. They announced their separation on February 15, 2018 after nearly two and a half years of marriage. “In an effort to reduce any further speculation, we have decided to announce our separation,” Aniston and Theroux said in a joint statement. “This decision was mutual and lovingly made at the end of last year. We are two best friends who have decided to part ways as a couple, but look forward to continuing our cherished friendship.”