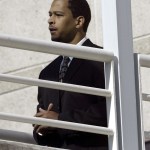 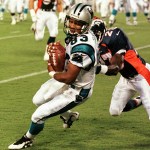 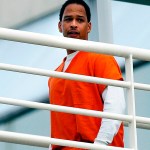 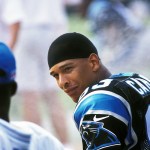 He’s a free man. Rae Carruth, the NFL athlete accused of conspiring to murder his girlfriend back in 2001, has been released from jail.

It’s been nearly 20 years since Rae Carruth, 40, was sentenced to prison for conspiracy to commit murder of his pregnant girlfriend, but today, he walks back into a free world. Rae was officially released from prison on Oct 22, after serving a 18-year sentence for his crime. The former athlete, who was a Carolina Panthers wide receiver before being whisked away to jail, masterminded a plot to kill Cherica Adams during a November 1999 shooting. As Rae starts his journey as a free man, here’s 5 things you should know about the former NFL‘er.

1. Rae still to this day denies that he conspired to murder Cherica, despite being found guilty.

Carruth has never admitted to conspiring to murder Adams, though a Charlotte jury convicted him on three counts, including conspiracy to commit murder. While he was acquitted of first-degree murder, his involvement with the crime was indubitable. His late girlfriend was nearly eight months pregnant at the time, when she was shot four times inside her car.

2.  He was the Carolina Panthers’ first-round draft choice in 1997.

Rae was in the third year of a promising NFL career at the time of his crime, and boasted a net worth of approximately $368,000.

His son, Chancellor Lee Adams survived the shooting in his mother’s womb, and turns 19 next month. The boy has been raised since birth in Charlotte by his grandmother, Saundra Adams. He did suffer brain damage as a result of the shooting, and has cerebral palsy.

Wherever Rae lives, he will occasionally have to meet with authorities for the next nine months, as part of his release requirements.

5. He shared a statement regarding his release.

“I’m excited about just being out of here. I’m nervous just about how I’ll be received by the public,” Carruth said in an interview WSOC-TV. “I still have to work. I still have to live. I have to exist out there and it just seems like there is so much hate and negativity toward me. I’m actually somewhat frightened.”