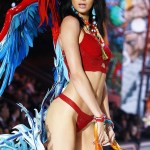 Let’s do this! Shoe designer Brian Atwood dropped major hints on Instagram that Gigi Hadid and Kendall Jenner are back for Victoria’s Secret 2018, baby! See his exciting posts, here!

There’s no official announcement yet from Victoria’s Secret yet, but it’s pretty much settled: Gigi Hadid and Kendall Jenner are walking in the 2018 Victoria’s Secret Fashion Show! Brian Atwood, who always designs the sky-high heels Victoria’s Secret models wear while strutting down the runway, dedicated two Instagram posts to the models, shouting out how happy he is to work with them again!

“Less than 1 month away!!!! Let’s do this @gigihadid @victoriassecret Can’t wait to show you what we have done for the show!!!!🔥🔥🔥🔥🔥 “, he captioned a hotter than hot pic of Gigi on the VS runway. He later posted an equally steamy pic of Kendall from her last show, writing, “Can’t wait to see this beauty @kendalljenner strutting in my shoes for the @victoriassecret fashion show… less than a month away!!!!”

OMG!! This is so amazing, considering both Gigi and Kendall didn’t walk in the 2017 show, which was located in Shanghai, China. Gigi never divulged why she wasn’t doing the show, only that she was “bummed” about it. There was speculation, though, that there were issues with getting a visa; Julia Belyakova, Kate Grigorieva and Irina Sharipova from Russia, and Dasha Khlystun from Ukraine were all denied. There was also the matter that the hashtag #GigiGetOutOfChina trended just months earlier, after the model came under fire for posting something on social media that appeared to show her seemingly mocking Asian facial features. She later apologized on Weibo, a social media channel available in China.

Can’t wait to see this beauty @kendalljenner strutting in my shoes for the @victoriassecret fashion show… less than a month away!!!! #fashion #angel #victoriasecretfashionshow #victoriassecret #sexy #brianatwood #glamour #sickshoes #nyc

As for Kendall, she didn’t even audition in 2017, probably because she had a campaign with competitor La Perla. We’re happy that she’s back in 2018!