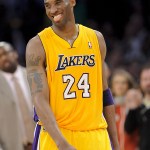 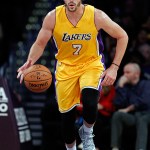 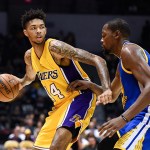 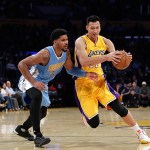 A fight broke out between Chris Paul and Rajon Rondo at the Los Angeles Lakers vs Houston Rockets game on Oct. 20. See the best reactions from celebrities in the crowd!

Things got heated during the Los Angeles Lakers home opener against the Houston Rockets on Oct. 20. After a foul was called on the Lakers in the fourth quarter, Rockets player Chris Paul claims he was spit on by the Lakers’ Rajon Rondo. While the Lakers have disputed this claim, what came next was clearly visible from multiple camera angles. Paul thrust his finger into Rondo’s face and neck, which Rondo responded to by punching Paul in the face.

The situation turned into an all-out brawl, with Brandon Ingram running in to throw a punch at Paul as well, while other players and coaches ran in to break up the fight. There were a few other bystanders who seemed to also want to jump into the altercation. In a clip of the fight, Travis Scott can be seen jumping up from his seat on the sidelines and yelling at the players.

Floyd Mayweather was also spotted court-side smiling and rubbing his hands together as the fight went on. After spotting Mayweather and Scott’s reactions, fans on Twitter couldn’t contain their laughter. “Travis Scott reaction to Rondo and Chris Paul fighting got me crying,” one person wrote. “Floyd’s reaction makes this 1,000 times better,” tweeted another fan.

Travis Scott reaction to Rondo and Chris Paul fighting got me crying pic.twitter.com/CuZ3SnkXp4

Rondo, Paul and Ingram are all likely facing suspensions and fines, but the severity of Rondo’s punishment will most likely depend on whether the NBA determines if any spitting on Paul took place, and if it did, whether or not it was intentional. The Lakers have argued that no spitting took place, but the Rockets have been standing by Paul’s account.