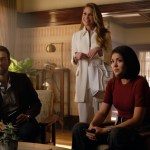 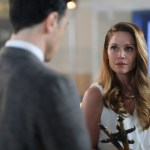 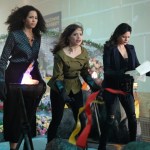 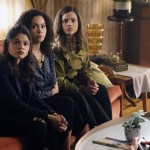 Mel, Maggie & Macy were warned not to trust Harry, so they put him to the test during the Oct. 21 episode of ‘Charmed’. But did their investigation do more harm than good? Read our recap!

The second episode of The CW’s reboot of Charmed, titled “Let This Mother Out”, focused on the sisters struggling with their new powers while also figuring out whether or not they could truly trust their Whitelighter, Harry. And that answer didn’t come without getting through a few obstacles first. For starters, Mel wanted to continue to talk to their mother’s spirit, while Maggie and Macy felt it was too dangerous to trust whoever was speaking to them and allegedly posing as their mom. So they set out to find out whether or not they could trust Harry first, and then, they’d deal with whether or not it was actually their mother that spoke to them through the Ouija board.

To figure out what was going on with Harry, the girls concocted a truth serum — one that Macy was supposed to hold onto, but when Mel’s on-again girlfriend, Nico, stopped by the house, they ended up getting their water canisters mixed up and Nico soon downed the entire mixture. This led to her spewing a bunch of truths both in the police station and outside with Mel, with the worst of it being the fact that she slept with her ex-fiancee twice while she and Mel were on a break. Yikes!

Meanwhile, Maggie joined up with her sorority sisters at the hospital, where they held some sort of seance to try and give a comatose patient some hope for recovery. All the girls held hands and formed a circle, but Maggie — who has the power to read minds — was flooded with everyone’s thoughts all at once. But the worst came when she held the patient’s hand and heard a bunch of screams. She freaked out, which alarmed the group, but she just said she was having family drama at home and her feelings caught up with her. It may have been a good excuse, but Maggie’s going to have to learn how to control her powers sometime soon!

And speaking of Maggie, she also had a terrible hookup experience with Brian this week, when all she could hear while they were half naked and making out was what he thought about her and her body. She just wanted to keep things casual, but after hearing him say that he loved her, she put an end to things, leaving his heart completely shattered. Poor guy!

Later, while Mel was home alone, the Ouija board started acting up and before we could say, “I wouldn’t do that if I were you,” she was having full-on conversations with the spirit behind the game again. Maggie walked in on it and reluctantly joined, and soon enough, their mom popped out of the board looking alive and well. Except didn’t she just die last week? Well a newly-revived Marisol — or at least that’s what this person wanted us to believe she was — had a tearful reunion with her daughters. However, once Harry caught wind of what was going on, he raced home with Macy to deal with the situation.

Marisol claimed that Harry was the one who killed her, and he wanted to steal their powers, but after a short interaction with Marisol, the girls soon realized that it wasn’t their mother that came through the Ouija board. Instead, it was a demon imposter, who wanted to steal their powers. Fortunately, the girls caught on early enough and vanquished the demon. But even so, there seems to still be trouble ahead!

After analyzing some goop left behind by a demon at Macy’s lab, Harry realized that the Source of all Evil is trying to make a return to Earth and the sisters may soon be facing a full-on apocalypse. Remember that comatose patient? Well, that woman now seems to be the vessel the goopy demon chose to possess — a first step in the process that’ll lead to the Source’s return. Gulp.