Bonding time with mom! Angelina Jolie took three of her kids out to dinner on Oct. 20, and she looked absolutely stunning while wearing very minimal makeup for the outing.

Angelina Jolie hit the town with her kids, Pax, 14, Vivienne and Knox, 10, on Oct 20. The doting mom went makeup-free for the outing, and looked stunning in her natural glow. Angie and the kids hit up a sushi restaurant for their night out, and the actress was all smiles as she enjoyed the quality time with her children. She wore black pants and a casual gray sweater for the dinner date, with her hair pulled back into a low bun. Aside from some gloss on her lips, Angie’s makeup was very minimal, and she was still glowing!

This night out comes as Angelina’s custody battle with Brad Pitt over their six kids rages on. Over the summer, a temporary custody order was put in place that allowed Brad to spend more time with the children than he was initially given. However, the two are still working to come to an agreement on a permanent order. Most recently, it was reported at the beginning of October that they were no closer to coming to a “truce,” despite it being more than two years since she filed for divorce.

Meanwhile, HollywoodLife has EXCLUSIVELY heard that Angelina has been missing what she had with Brad. “Angie misses talking to Brad every day,” our source explained. “Their conversations now are brief, if at all, and usually through an assistant. She misses sharing the ups and downs of life, and her daily struggles.” 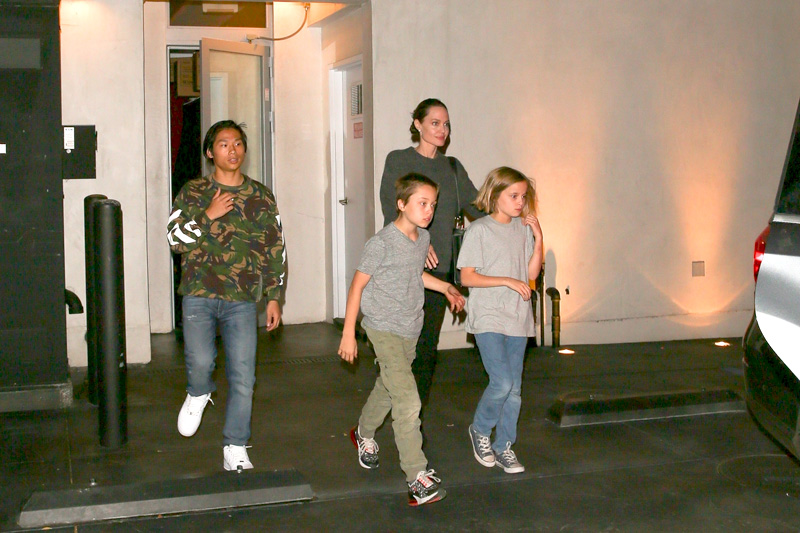 While they’re both focusing on the kids, Angie and Brad are also both back at work on separate movie sets, so they’re certainly keeping busy during this trying time.