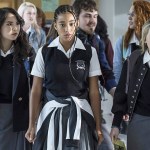 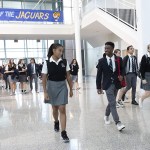 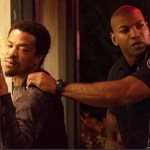 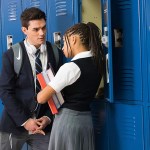 Angie Thomas didn’t just write this NYT-bestselling book — she also helped bring the powerful film adaptation to life! She talked to HL exclusively about the ‘surreal’ experience on set.

The Hate U Give is an incredibly important story, and we’ve all got Angie Thomas to thank for it. After the tragic murder of Oscar Grant, 22, by a white cop, Angie was inspired to write a short story in college that, through years of work and revisions, turned into the New York Times bestselling novel that debuted at number one — and officially hit theaters on Oct. 19. With Amandla Stenberg, 19, in the starring role, plus an all-star cast including Russell Hornsby, 44, and Regina Hall, 47, the movie is a must-see. But Angie didn’t have to wait to watch her characters come to life on the big screen. The writer was actually on set for some major moments.

Her first day, for example, was the filming of one of the protest scenes. Extras flooded the set asking for justice after a young black man, played by Algee Smith, 23, was shot and killed by a cop. “As I was driving up to set, I could hear them chanting, ‘Justice for Khalil,” Angie said. “When I left my windows down and I heard it, I had to pull over to the side of the road because I started crying. When I got there, it was even more surreal. I see hundreds of extras there doing this and saying this with pictures of Khalil on the signs, saying things that were inspired by my words. It was amazing. I’m still honored that so many people came together to bring that moment to life.”

The movie is full of emotional moments like this as the main character, Starr, learns to stand up and use her voice after witnessing Khalili’s murder. She’s been walking the line between her private high school and her rough neighborhood for years, so much so that she feels like there are two different versions of herself. These versions collide in this coming-of-age story as she is forced to confront a variety of complicated issues — her white best friend’s microaggressions, her uncle’s job in the police force, and her father’s severed gang ties, for starters.

With so much going on, the moving film won’t just affect audiences while they watch, but will follow them outside of the theater as well. The Hate U Give will lead viewers to have important conversations with their friends and family members that they may have never had before. Not only that, but Angie really hopes that young black teens in the audience will feel seen — and loved — for all that they are.

“We did a screening for high school students in Atlanta and they were literally reacting as we were watching,” Angie said. “They were shouting and making comments, and afterward they said, ‘Thank you for this. This is us.’ And for me, that was a surreal moment because that’s all I wanted. I wanted them to see how amazing they are because so often society makes them feel that they’re not enough or too much and I wanted them to see how perfect they are. I’m so excited for specifically young black people to see this movie.”

But as important as this story was to tell, Angie doesn’t want every diverse movie to have to be so intense. In fact, she called for publishing to start making a change. “I want to see some stories about black girls who are just living,” she said. “I want to see publishing allow black kids to be carefree. I want to be able to write stories that are not just dealing with racism and police brutality. I want more carefree black girl stories. I want them to have their road trip movies. I want a black girl to be able to go to the movies and see a rom com with a girl like her. I hope that we don’t put them in a box and we allow them to have just as many complex needs and experiences as their white characters.”

We couldn’t agree more! The Hate U Give is out Oct. 19 and Angie’s second novel On the Come Up will hit bookstores in February 2019. Don’t miss out on either!