On her first outing since the palace announced her pregnancy, Meghan Markle paid tribute to the late Princess Diana wearing this statement piece! See the beautiful photos!

Meghan Markle, 37, honored Princess Diana during her first public appearance since her pregnancy announcement on Monday, October 15. The Duchess of Sussex was photographed wearing Princess Diana’s butterfly earrings after she touched down in Sydney, Australia, October 14, as part of her first royal tour with Prince Harry, 34. Princess Diana previously wore the earrings during a trip to Canada on May 3, 1986 — just one year after she gave birth to Harry. The fan account titled, “Meghan’s Mirror,” was the source that spotted the earrings.

The fan account also pointed out that Meghan was photographed wearing a gold bracelet of Diana’s. The late princess wore the piece of jewelry when she visited the Lord Gage Centre for Old People, a Guinness Trust Home, in Newham, East London in 1990. Meghan looked beautiful in a white sleeveless dress by Australian designer, Karen Gee. — See a close-up photo of Meghan wearing Diana’s earrings, below.

This isn’t the first time Meghan has paid tribute to Princes Diana. At her wedding reception, Megan wore Princess Diana’s aquamarine ring on her right hand. She paired the ring with a breathtaking custom silk Stella McCartney dress. Diana wore the emerald cut ring to an auction of her own clothes at Christie’s in 1997. 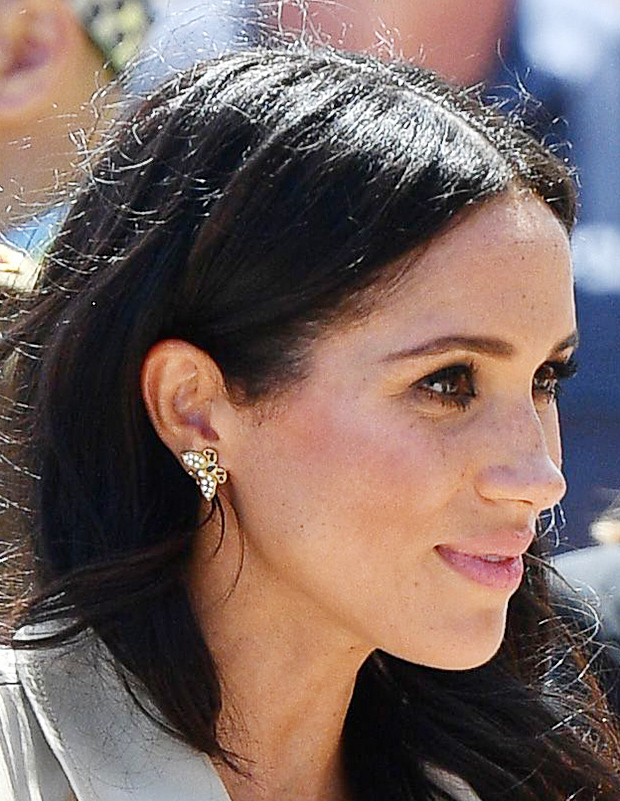 Meghan Markle wears Princess Diana’s butterfly earrings while out in Sydney, Australia after arriving on Sunday, October 14, 2018 as part of her first royal tour with Prince Harry.

As previously noted, Meghan and Harry are in Sydney for what marks the former Suits star’s first royal tour. The royals have already attended a welcome reception at Admiralty House, where they were given their baby gifts by the Governor General Peter Cosgrove and his wife, Lady Lynne Cosgrove. Meghan and Harry will spend 16 days touring Australia, Fiji, New Zealand and Tonga.

They are expecting their first child together in the spring of 2019, Kensington Palace confirmed Monday, October 15. “Their Royal Highnesses The Duke and Duchess of Sussex are very pleased to announce that The Duchess of Sussex is expecting a baby in the Spring of 2019,” the Palace said in a statement. “Their Royal Highnesses have appreciated all of the support they have received from people around the world since their wedding in May and are delighted to be able to share this happy news with the public.”

The pregnancy news comes just five months after Meghan and Harry’s royal wedding on May 19. The actress and prince began dating in July 2016, after meeting on a blind date.