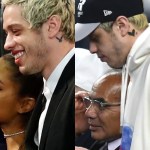 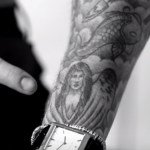 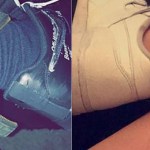 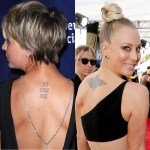 Will they ever learn? The biggest stars of today seem to have all made a tattoo mishap at one point or another! See the most notable post-breakup tattoo cover ups from your fave stars.

SNL’s Pete Davidson, 24, shocked fans when he updated his Ariana grande dedication tattoo to a generic heart, and when news of their split finally broke on Oct. 14, the decision made sense. Time and time again it seems that celebrities jump the gun on getting tattoos of their significant others, which often end in nasty, highly-publicized splits. Pete isn’t the only one who has made the mistake. Justin Bieber, 24, Kylie Jenner, 21,and even Angelina Jolie, 43, have done the same! We’re looking at all the times that brokenhearted stars have headed to the tattoo parlor for an emergency switch up.

Early on in his relationship with Ariana, Pete inked his skin with a Playboy inspired bunny ears mark, that just so happened to be the one Ari wore on the cover of her Dangerous Woman album. While the tattoo was the ultimate tribute, and a seemingly permanent sign of their love, it also served as the earliest sign of their split. Pete’s tattoo artist doodled over the ears on Oct. 8, sending fans reeling. Of course, we now know that he couple are no more.

Justin had to make some updates to one particular tattoo on his body as well. What was once a portrait of his ex-girlfriend of Selena Gomez on his lower arm, became a more generic portrait of just any girl, thanks to some extra “shading” according to The Biebs. Awkward!

Keeping up With The Kardashians star Kylie Jenner has had a tattoo mishap of her own. When she called it quits with her longtime beau Tyga, Kylie was left with a tattoo of his initial, “T,” on her ankle. Don’t worry though – Kylie did some quick thinking, and swiftly changed the “T” to the letters “LA,” as a tribute to her home city of Los Angeles. When she began dating her current boyfriend, Travis Scott, she cemented her new relationship by getting matching butterfly tattoos with the rapper. See all of the wildest breakup tattoo cover ups from your favorite celebs in the gallery above!