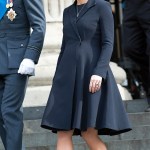 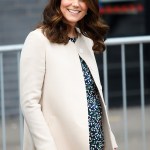 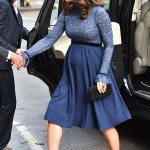 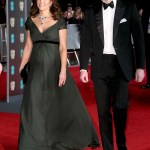 News broke on Oct. 15 that Meghan Markle is expecting her first child next Spring, and luckily, her ‘sis’ Kate Middleton knows a thing or two about maternity fashion! See her best pregnancy looks below.

Meghan Markle, 37, is pregnant! She’s probably just over three months pregnant at this point, and barely showing, but we can’t wait to get eyes on that bump! Meghan wore a tented, unbuttoned navy coat by Givenchy at Princess Eugenie‘s wedding on Oct. 12, which definitely lead to speculation. Kate Middleton was pregnant with all three children in the winter and into spring, so Meghan will have a similar time frame as Kate as her bump grows. Maybe she will “re-wear” some of Kate’s favorite maternity pieces!

Kate announced all three pregnancies fairly early, between two and four months, since she battled severe morning sickness, Hyperemesis Gravidarum, with all three children, and was forced to cancel royal appearances. Kate and Prince William announced on Dec 3, 2012 that they were pregnant with their first child, and Prince George was born on July 22, 2013. They announced again on Sept. 8, 2014, and Princess Charlotte was born on May 2, 2015. Their third announcement came on Sept. 4, 2017, and Prince Louis was born on April 23, 2018. She was pregnant with Princess Charlotte and Prince Louis at almost the exact same time of year!

Kate’s bright pink coats during her pregnancies sent fans spiraling, thinking it would be a girl. But she actually loves wearing color, and wore both blue and pink throughout all three pregnancies. Meghan’s wardrobe has been fairly neutral and subdued so far, but maybe she will take a hint from Kate, and start wearing bright colors during her pregnancy! Meghan’s also worn tight silhouettes and a lot of trousers — she may have to switch to loose dresses! Kate especially loves the brand Seraphine, so maybe Meghan should start shopping!

Perhaps Meghan could even experiment with prints! Kate wore a leopard dress while visiting the Turner Contemporary gallery in March of 2015. It was actually a re-wear of the dress she wore at the Royal Princess cruise ship naming ceremony in Southampton in June 2013. She also wore black and white polka dots in April 2013. We can’t wait to see Meghan’s pregnancy looks!