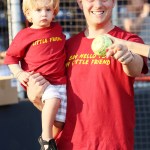 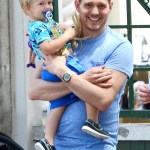 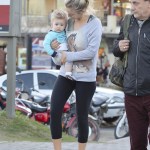 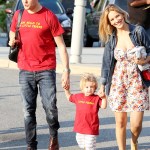 Michael Buble announced his retirement from music in his last interview, ever, on Oct. 12. Find out why his son Noah’s ‘life changing’ cancer battle led him to decide that he’ll never read his ‘name again in print.’

UPDATE: Michael Buble is NOT quitting music after telling The Daily Weekend Magazine, “I’m retiring from the business. I’ve made the perfect record and now I can leave at the very top.” His rep has since clarified that saying it was his “last” interview was a joke, and provided HollywoodLife the following statement: “Happy to report he is not retiring. He was joking and the writer knew it but didn’t print that it was a joke. He did several interviews right after that one on the same day.”

ORIGINAL STORY: We’ll miss you, Michael Buble. After the 43-year-old singer delivered a number of treasures like “Haven’t Met You Yet,” “Cry Me a River” and “Feeling Good,” the four-time Grammy Award winner is retiring. “I don’t have the stomach for it any more,” he told the Daily Mail Weekend Magazine in an interview published on Oct. 12. “I decided I’ll never read my name again in print, never read a review, and I never have. I decided I’d never use social media again.” At the end of the interview, Michael revealed his heartbreaking decision. “This is my last interview,” he announced. “I’m retiring from the business. I’ve made the perfect record and now I can leave at the very top.” This means his upcoming album Love, set to be released on Nov. 16, will be his last. HollywoodLife has reached out to Michael’s rep for a comment.

Michael’s son Noah, 5, was diagnosed with hepatoblastoma, a liver cancer, at just three years old. Although Noah’s health has since improved, as we’ve told you in 2017, the battle changed his father forever. “You just want to die. I don’t even know how I was breathing,” Michael also shared. “My wife was the same and even though I was the stronger of the two of us, I wasn’t strong. My wife was… I’m sorry, I can’t make it to the end of that sentence…let’s just say we find out who we are with these things.” The singer is married to Argentinian actress Luisana Lopilato, 31, who also took a hiatus from showbiz. Now, the father of three has different priorities. “Why are we here? Is this all there is? Because if this is all there is, there has to be something bigger,” he continued. “My whole being’s changed. My perception of life.”

The diagnosis not only changed Michael’s way of thinking, but gave him a wake up call. “When this terrible news came in I realized I wasn’t having fun in the music business,” he went on. “But the diagnosis made me realize how stupid I’d been to worry about these unimportant things. I was embarrassed by my ego, that it had allowed this insecurity.” That’s why the singer, praised for his fusion of jazz and pop, decided to stop reading reviews. “The celebrity narcissism. I started to crumble. But then I started to wonder why I wanted to do this in the first place.”

Michael voiced similar heartbreaking words just last week. “It sucked and it still sucks, because what we went through was THE worst possible thing that you could hear as a parent and maybe as a human being,” he told The Sun in an interview published on Oct. 4. “I’d much rather it’d have been me. I wished that many times, I wished that it happened to me.” Michael also shares another son Elias, 2, and 2-month-old daughter Vida, with his wife.