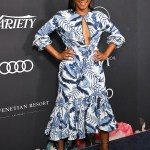 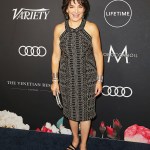 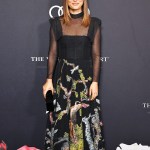 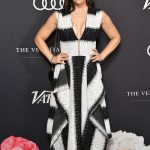 Before Tiffany Haddish went on stage at Variety’s ‘Power of Women’ event on Oct. 12, HL caught up with the comedian as she spilled why the POTUS is spooky and her voting plans during our EXCLUSIVE chat! Watch, here.

Tiffany Haddish, 38, kept it real with HollywoodLife, just like she does on the big screen! We caught up with the Night School actress before she proceeded to be honored at Variety’s Power of Women luncheon in Beverly Hills on Oct. 12, an annual event that honors Hollywood’s most powerful ladies. Variety commended Tiffany’s volunteer time and personal donations she’s given to The Unusual Suspects Theatre Company in the San Fernando Valley, which mentors kids, families and the elderly from underprivileged communities. “We need to be recognized for our hard work,” Tiffany EXCLUSIVELY told us on the red carpet. “Everyone needs to be recognized and validated for the work that they put in so they continue to put in more.” And that especially rings true considering the administration that presides over America, which Tiffany touched on.

“It’s a scary time for humans,” Tiffany continued to tell us. “Donald Trump’s in office, guys. It’s like a scary movie, right?” Although the Emmy Award-winning comedian tried to keep it lighthearted, there’s no mistake — she’s frightened, just like thousands of women and Americans are in the wake of the new administration’s decisions, and the backlash to movements like #MeToo. “You don’t know what’s going to happen,” Tiffany added. “I’m just looking forward to seeing what happens! And I got my safe room, so.” But Tiffany’s trying to have some say in that unforeseen future! Ahead of the Nov. 6 midterms and presidential elections two years after that, the actress revealed she’ll be heading to the voting polls. She continued, “But we still got to keep the same president, so….for two more years.”

Just like the Girls Trip actress didn’t hold back for our mic, she was just as candid inside the venue! “Sorry I’m so honest, but I’m not sorry,” Tiffany told the attendees gathered at the Beverly Wilshire Four Seasons Hotel. “I feel like it’s very important to always be your best self and be yourself, and try not to be something you’re not. Because that’s when you become a bitter-ass bitch, when you being somebody you not.” Tiffany related those sentiments to the kids she works with at The Unusual Suspects Theatre Company, which offers programs like a theatre residency and playwriting workshops. “These kids, you could tell, they’re probably not allowed to talk at home, they’re probably not allowed to be their true selves,” she said on stage. “And in this environment, they were allowed to experiment, to be characters, to be themselves, to tell their stories, to share their experiences, and then we’re in a safe space.”

The four other Power of Women honorees were Emma Gonzalez, Regina King, Lena Waithe and Natalie Portman. The guest list was just as star-studded, which included Alyssa Milano and Thandie Newton! Get the full 2018 Power of Women red carpet recap, here.