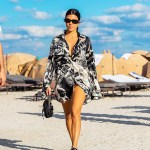 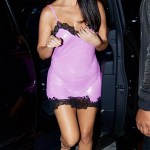 Pizza and ice cream are on the menu for Kourtney Kardashian! She’s shied away from gluten and dairy, but now she’s ‘switching things’ up in her diet. Here’s why!

Kourtney Kardashian‘s known for keeping eating clean, but the mother of three has revealed that she’s easing up a little bit. While Kourt’s still a major proponent of eating healthy and using organic products, she’s now fine with “switching things up” and indulging in foods she avoided every once in awhile! The Keeping Up With The Kardashians star revealed in an October 10 post on her app that, “Lately, I’ve been less strict about avoiding gluten and dairy. I noticed my tummy would hurt when I occasionally treated myself to ice cream or pizza, so I’ve switched things up. I’m trying to keep small amounts of both dairy and gluten in my system, so my body is used to it when I do have a little.”

Another reason she’s trying to switch her diet? Her kids! Kourtney spent most of the summer traveling around the world, and her kiddos Mason, Penelope, and Reign often came along. “I love trying local food and eating everything without rules — especially when I’m traveling — so this is working better,” she wrote on her app. “When the kids and I were on vacation in Italy this summer, they loved getting gelato every day — and I always had a small scoop, too! When I’m on vacation, or if we go to Disneyland, that’s the time to live life and I’ll have whatever I want.”

Don’t get it wrong, though; it’s not pizza parties every day. “Everything in my pantry is still free of dairy and gluten, so when I’m at home, it’s still how I eat,” Kourtney said. “But when I go out, or have a craving, I’ll have whatever I want. I try to do everything in moderation in my usual routine.” Good for her!