North got glam when she stepped out with her mom earlier this week, and fans are NOT here for it! See what they had to say about Kim’s mini-me’s makeup look.

Looks like someone got into her mom’s makeup drawer — but is this beauty look appropriate for a baby? Fans slammed Kim Kardashian, 37, for letting her daughter North West, 5, wear cosmetics when the mother of three posted a sweet shot of them walking in Manhattan. “NYC Nights,” the caption read, but Kim’s Instagram followers cared less about the location and more about the pink eyeshadow and foundation the kid seemed to be sporting. “STOP the makeup thing with North,” one person wrote. “She’s five, man.” Another added, “Stop letting that baby wear makeup. And to make it worse, it’s two shades too light. Help her embrace her natural beauty and melanin as a young princess should.”

But not everyone thought it was such a huge deal! “I think it’s okay,” one fan wrote. “Every little girl wants to play dress up. I think it’s Kim’s decision if she wants to let North wear makeup.” Whether you disagree with the criticism or not, one thing is for sure. Kim and North made a seriously adorable mother/daughter pair. The little one wore an orange dress with teeny white sneakers, while her mom had on a pale snakeskin jacket with matching pants and boots, as well as a nude undershirt. Both were rocking high ponytails. Too cute!

This wasn’t the first time North has been seen wearing makeup, though — or the first time Kim has been slammed for allowing it. Not only has the little one always loved watching her mom get her makeup done, but she debuted her contouring skills back in June on her mom’s Instagram story. 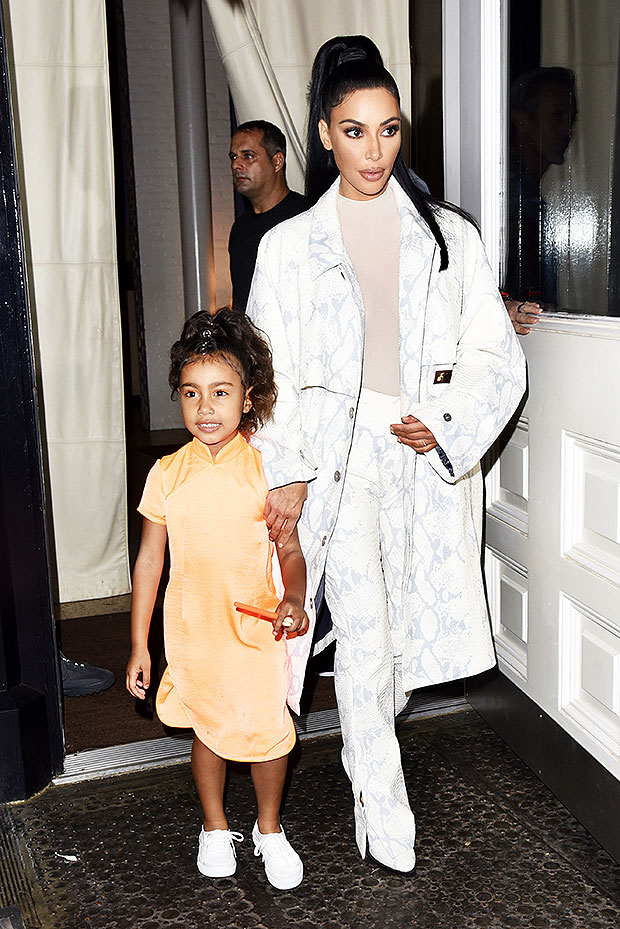 Later that day, North was shown wearing red lip gloss. “North wearing shade #6 in the new classic Blossom Collection,” Kim wrote. “Relax mom shamers, it’s coming off in a few minutes. I needed a bribe to get out of the door… you feel me?!”

LOL! Maybe that was the case this time around with the pink eye shadow? Kim’s clearly got a little mini makeup mogul on her hands. No matter what the haters have to say about it, it’s ultimately Kim’s decision whether or not North should experiment.