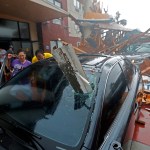 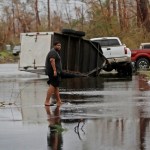 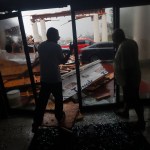 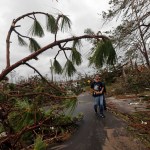 Well, this was a close call! As Hurricane Michael whipped through Florida, one reporter nearly suffered a blow to the head as debris flew by. Watch the scary moment.

As Hurricane Michael demolished the Florida panhandle, some reporters still were brave enough to cover the storm live on the scene. Jim Cantore, broadcast meteorologist for The Weather Channel, was one of these reporters, but his line of work nearly left him seriously injured! The reporter just narrowly escaped getting smashed in the head by flying debris during a Oct. 10 taping from Panama City, Florida. In the video, which has now gone viral, Jim can be seen standing his ground as heavy rain and 155 mph winds pummel him. But then, his words trail off, as a whopping plank of wood whips towards his head, barely missing him! The dangerously close call had the internet in disbelief. “INSANE!!!” one person wrote on Twitter after catching the clip.

Moments after the scare, Jim became a bonafide hero, when NBC reporter Kerry Sanders was nearly knocked off his feet due to the perilous storm. In a separate video, Jim can be seen rushing to the reporter’s side, and stabilizing him, while waiting for the wind gust to die down. Kerry publicly showed his gratitude to Jim for saving him. “My long time friend @JimCantore just rescued me as #hurricanemicheal was too strong for my balance during a live report. I’m inside and safe. Thanks Jim & @weatherchannel,” he wrote in a Tweet.

Hurricane Michael has proved to be as destructive as predicted, and has left much of the Florida panhandle in ruins. The catastrophic Category 4 storm proved to be the strongest to his the state in records dating back to 1851. While two deaths were already reported, the death tolls is expected to rise, according to the New York Times. Neighboring stares saw devastating damage as well and, more than 800,000 customers had lost power in Alabama, Florida, Georgia and South Carolina, according to electrical providers in those states.

We’re keeping all of the states affected by the storm in our thoughts. While Jim experienced a close call this time around, we’re glad to see he’s doing alright too.