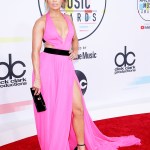 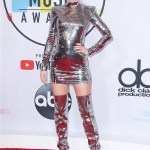 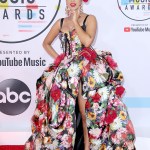 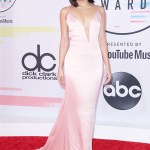 She’s back, baby! Taylor Swift is opening the AMAs, but first, she looked flawless on the red carpet wearing a super sexy silver look!

We’ve missed you Taylor Swift! We know Tay, 28, has been super hard at work touring the country for her Reputation Stadium Tour (we saw her!) but there is something about an awards show that is different and special! Taylor opened the 2018 AMAs, singing “I Did Something Bad” and we know it will be truly spectacular. Taylor hasn’t performed live at an awards show since the Grammy Awards in February 2016!

Before she took the stage, she slayed on the carpet, wearing a head to toe silver outfit. Her mini dress was super short, showing off her toned legs, with long sleeves and a high neckline. She wore matching thigh-high silver and black boots. She looked like a disco ball, or a robot, or something ….but she looked AMAZING. See her look from all angles below:

She wore her hair in a slightly undone french twist. Her makeup focused on her cool, futuristic eye makeup, and she ditched the cherry lips for a pink shade.

Taylor recently broke her longtime silence on politics on her Instagram, writing: “In the past I’ve been reluctant to publicly voice my political opinions, but due to several events in my life and in the world in the past two years, I feel very differently about that now. I always have and always will cast my vote based on which candidate will protect and fight for the human rights I believe we all deserve in this country. I believe in the fight for LGBTQ rights, and that any form of discrimination based on sexual orientation or gender is WRONG.”

Taylor continued, “I believe that the systemic racism we still see in this country towards people of color is terrifying, sickening and prevalent. I cannot vote for someone who will not be willing to fight for dignity for ALL Americans, no matter their skin color, gender or who they love.” Since her statement, voter registration numbers have skyrocketed, especially in her home state of Tennessee.