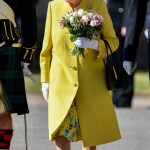 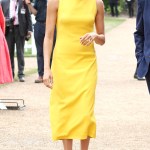 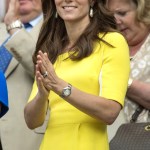 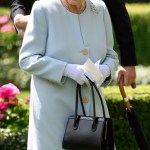 Diamond, diamond, on the hand. Who has the best engagement ring throughout the land? Ahead of Princess Eugenie’s royal wedding, see if her bling outshines the ring Meghan Markle rocked on her finger.

Princess Eugenie, 28, will tie the knot with Jack Brooksbank, 32, on October 12, so that means she has only a few more days left to enjoy her engagement ring. After seven years of dating, Jack proposed to his beloved during a January 2018 trip to Nicaragua, getting down on one knee to ask if she’ll make him the luckiest many in the world. Afterwards, he gave her a blush-colored padparadscha sapphire ring surrounded by many gorgeous diamonds, according to PEOPLE. The splash of color is a very interesting choice –a smart one, more on that in a bit – and it sets it apart from the engagement ring Prince Harry, 34, gave Meghan Markle, 37, after they got engaged. Being that we’re talking about the British monarchy and jewelry, the question now is – which bling can be called the “lord of the engagement rings?”

Both rings are significant to the British crown. Eugenie’s ring, which was flaunted during the couple’s engagement portrait, bears a striking resemblance to the ring her father, Prince Andrew, 58, gave her mother Sarah “Fergie” Ferguson, 58, in 1986. Prince Andrew proposed to Fergie with a Burmese ruby ring from Garrard, a red jewel inspired by Fergie’s signature red hair. The center jewel was surrounded by 10 diamonds, forming a floral pattern. “It’s something that we’ve discussed the last few weeks,” Andrew said at the time. “And we came to the mutual conclusion that red was probably the best color for Sarah. That’s how we came to the choice of the ruby.”

A similar level of thoughtfulness went into Princess Eugenie’s ring. “I found a ring in a jewelers and then proposed to Eugenie without it and came back and we designed the diamonds around this padparadscha sapphire,” James told the BBC. “And what’s amazing about it is that it changes color from every different angle that you look at it, which is what I think of Eugenie. That she changes color and is just so amazing.” 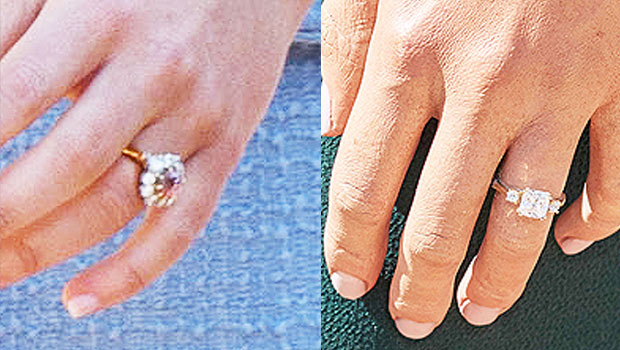 Whereas James seemed to mirror Fergie’s engagement when getting a ring for Eugenie, Prince Harry incorporated jewels from his mother’s collection into Meghan’s ring. While Meghan’s engagement ring is a straightforward diamond affair, there’s a lot of heart involved. The main ring, a stone from Botswana, is surrounded by two diamonds that once belonged to the late Princess Diana. While not at extravagant as Eugenie’s ring, the connection to Princess Diana really gives Meghan’s ring an extra bit of oomph.

It’s hard – almost impossible – to pick which one is “better,” since both rings are deeply personal and unique to each couple. While royalists debate which ring they can prefer, let’s get ready for the second royal wedding of 2018. Princess Eugenie and James will wed at St. George’s Chapel in Windsor Castle, with Eugenie’s older sister, Princess Beatrice, 30, will be the Maid of Honor. TLC’s coverage of the wedding begins at 4:25 AM ET, so get up early to see what ring Princess Eugenie is wearing at the end of the ceremony.