Kourtney Kardashian stepped out in a sheer black top, showing off her bra, and we can’t get enough of her sultry style! — Check out all of her best see-through looks!

Kourtney Kardashian, 39, is one hot mama! — The mother of three stepped out in a sexy, black sheer top in Los Angeles on October 4. The reality star was photographed leaving a studio after filming segments for the 16th season of Keeping Up With The Kardashians. Despite her sultry top, Kourt kept her look casual in ripped blue jeans and a small heel. She wore her hair in a slicked back up do’, and accessorized with small black shades and a tiny bag.

The eldest of the Kardashian sister bared her teeny waist and obvious abs in her long-sleeve, sheer top. — And, we noticed that this is a go-to style piece of hers! Kourt has stepped out in various sheer styles, from bodysuits, to dresses and even crop tops; She’s done it all. Therefore, it’s evident that Kourtney is here for sheer, and it’s not going anywhere. Check out her best see-through style moments in our attached gallery!

Kourtney loves to pair black bras under sheer black tops. It’s her bottoms that she loves to swap out, including ripped jeans, tight skirts, stylish sweats and daisy dukes. When the fit ness fanatic decides to don different colors, she’ll opt for a white sheer top with colorful bras underneath, or forest green styles, which we’ve seen her wear in the past. Whether it’s a coffee run, a workout, a red carpet or a work commitment, Kourtney knows how to stun in see-through looks. And, we’re so here for it! 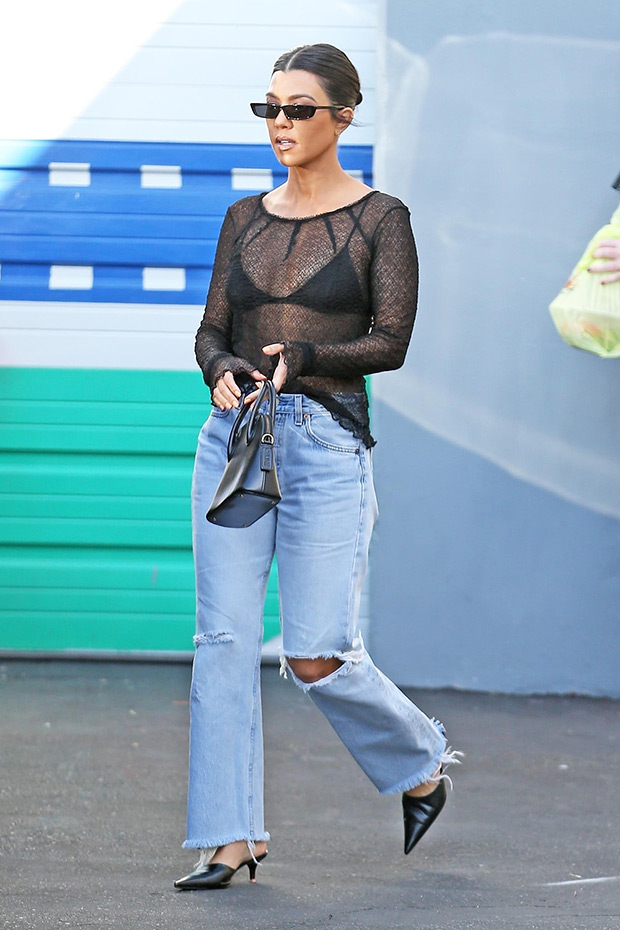 Kourtney Kardashian leaves a studio after filming for Keeping Up With The Kardashians’ 16th season in Los Angeles on Monday, October 8, 2018.

Kourtney has been spotted out in these sultry sheer styles amidst her recent breakup with Younes Bendjima. The pair split back in July after nearly two years of dating. While it’s unclear as to why they ended their relationship, it appeared to be a messy split after Younes was forced to defend himself online again cheating reports.

Despite the breakup, Kourt’s never looked better, and she seems unfazed by the entire situation. In fact, she’s been spotted on multiple occasions with her new rumored boyfriend, model and close Kardashian friend Luka Sabbat.