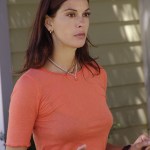 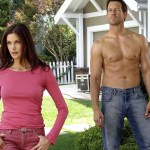 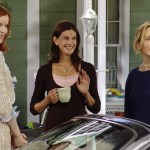 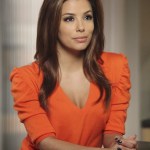 Felicity Huffman posted the sweetest ‘Desperate Housewives’ anniversary tribute, but one cast member was snubbed in her post! Is there still drama between her and Teri Hatcher?

No bad blood? We’re not believing it. After Felicity Huffman, 55, denied for years that there is a feud between Desperate Housewives cast members, she snubbed Teri Hatcher, 53, on social media! On Oct. 6, the actress took to Instagram to celebrate the show’s 14th anniversary, and shared a heartfelt message for a number of her co-stars. Marcia Cross, Eva Longoria, and Nicollette Sheridan all received sweet messages on IG as Felicitiy looked back on the show, but Teri, who played Susan Mayer on the show, did not get the same treatment.

The Instagram dedication was a series of posts, each featuring a different main character from the show, including Teri. However, Teri’s image received a generalized quote about the TV series, rather than an special anecdote. Felicitiy raved about getting to work with Eva in one pic. “I remember watching @evalongoria eat… basically all day long… basically anything she wanted… and rocking that perfect figure! She also had this contagious laugh. You could hear it blocks away and everyone would start to smile just knowing she was coming on set ❤️” she said. She also shared a silly memory of working with Nicollette! “The 100th episode was a great day! @nicollettesheridan started a cake fight, but @evalongoria wasn’t far behind.” But – a sweet caption for Teri was nowhere to be seen.

Felicity’s dedication to Marcia might have been the sweetest one of all! “On the pilot episode, there was a scene where @reallymarcia drops off two baskets of muffins at the funeral (and asks for the baskets back). And I remember thinking, ‘That is the most beautiful woman I have ever seen,'” she wrote in one post.

The snub for Teri doesn’t exactly come as a surprise. During the height of the show’s popularity, rumors of trouble between the cast members swirled, and there was even some alleged drama when the ladies shot their Vanity Fair cover. Then, it came to light that Nicollette had once labeled Teri the “meanest woman in the world,” according to cast member Marc Cherry.