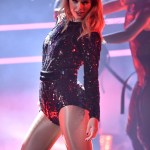 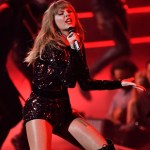 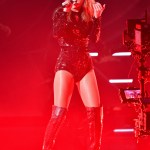 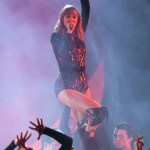 Cardi B is definitely back! After taking time off to have, and look after, her baby Kulture, the New Yorker rocked the AMAs with an amazing performance of her hit song, ‘I Like It.’

Cardi B, 25, brought the house down at the American Music Awards in Los Angeles on Oct. 9 by rocking the show with her hit song “I Like It.” It was the rapper’s first televised performance since the birth of her daughter Kulture, in July and it was well worth the wait! Cardi – who was nominated a massive eight times – hit the stage with Latin artists Bad Bunny and J Balvin, a live band, and a fabulous Cuban theme, which included an array of dancers. The new mommy started the set rapping, while lying down on a spinning wheel, before kicking her leg in the air and jumping up to deliver an amazing set that even included her doing the salsa with a hunky dancer. Cardi had the crowd on its feet, especially her hubby Offset, who seemed to thoroughly enjoy his wifey’s performance.

The Bronx rapper looked sensational in a floral dress, which she whipped off to reveal her legs in a pair of shorts. HollywoodLife knew what to expect because Cardi B’s makeup artist Erika La’Pearl gave us a heads up on the eve of the AMAs. “Cardi’s outfit for the AMAs tomorrow is very colorful,” Erika, told us EXCLUSIVELY, “It has a lot of pinks, reds and blues. Everybody is going to be talking about her red carpet look and her performance look. Her performance look is going to be similar to the red carpet look, but it will be a little bit more sparkly. She’s even going to rip off the dress and it’s gonna be really cute.”

While all the buzz after the show may be about Cardi B’s post-baby body and how slim she looks, three months after giving birth, the rapper herself thinks she may have lost too much weight! On Oct. 8 she posted an Instagram photo of herself wearing tight leather pants and a matching bra top, which showed off her tight abs. She captioned the pic, “Now that I lost all the baby weight, I gotta gain some back. Skinnymomma.”

Cardi B really sticking her foot down our necks telling us she's here to stay huh. Ok queen! #AMAs pic.twitter.com/sB7FtVNOxd

It’s impressive that Cardi B has bounced back to put on such an amazing performance, in the first place, as she recently revealed why she pulled out of Bruno Mars’ tour a month after her baby was born. In an Oct. 9 interview with W Magazine she said, “People don’t really talk about what you go through after pregnancy. Like, they don’t tell you that you get stitches down there or that your first two weeks you’re constipated. Or that you get contractions because of breastfeeding. I wasn’t expecting that.” If her AMA performance is anything to go by, it seems that Cardi B is healed, back and better than ever!