While making her final promotional stop in Australia, Rihanna looked sexy as ever in a light pink mini dress. The looks once again put her cleavage and amazing legs on display. See the pics here!

Rihanna has been bringing her Fenty Beauty line internationally over the last few weeks, and she concluded a trip to Australia with an event at the Sephora in Sydney’s Pitt Street Mall on Oct. 3. The singer absolutely slayed her style for the appearance, wearing a tiny, blush-colored dress. The ensemble was cut very short, so her toned legs were on full display. Meanwhile, her cleavage was also spilling out of the top of the ensemble, and RiRi rocked it like a pro.

She completed the look with her hair in thick, loose curls, some makeup from her own collection, and the micro pave bracelet by Sydney Evan! Hundreds of fans showed up to get a glimpse of the superstar, lining the streets to try and get a peek. Rihanna has stepped out in quite a number of sexy outfits over the last few weeks, but this might be our favorite yet! Just hours after the event, though, she changed into her sweats and was photographed heading to the airport to end her trip Down Under.

Interestingly, Rihanna made this trip to Australia solo, with her boyfriend, Hassan Jameel, nowhere in sight. The two have been incredibly low-key and private since they got together a little over a year ago, but we haven’t seen them out and about together since July at this point! 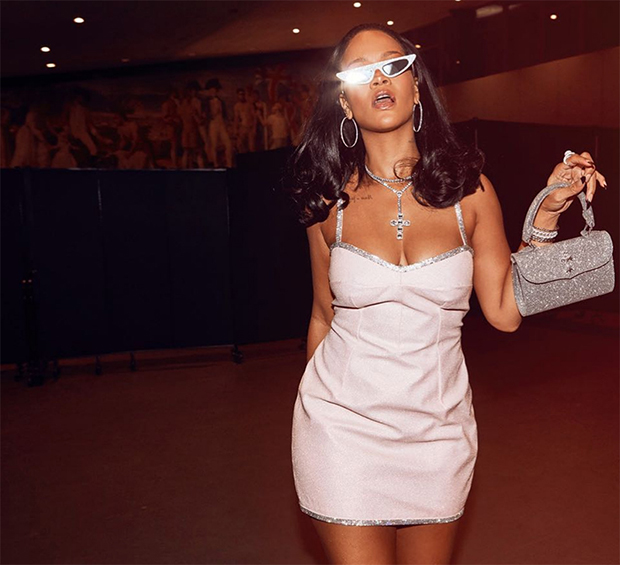 Clearly, Rihanna is putting a big focus on her work right now, as she builds her Fenty brand. Of course, fans are also hoping she’s working on new music in the process, but there’s been no confirmation of when that will be coming!