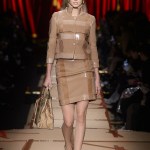 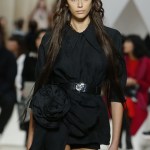 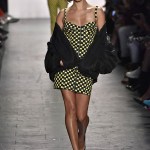 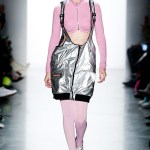 We’ve seen it all on runways. Still, nothing is as shocking as bangs! See the simple ‘do completely transform supermodels like Hailey Baldwin and the Hadid sisters.

Bangs rebrand you. One second you could look like ’70s icon Brigitte Bardot, and a one-inch trim later, you’re a posh Audrey Hepburn! Spectators can even mistake a runway regular like Hailey Baldwin, 21, as a fresh face after stepping out in bangs. The model, normally identified by her sporty shoulder-length hair, basically went incognito at the Jeremy Scott Spring/Summer 2017 NYFW show with asymmetrical bangs and a lopsided bob to match. Kendall Jenner, 22, didn’t even need a full curtain of forehead hair to look like a new woman. With side-swept bangs and a pixie ‘do, the cardboard box on her head wasn’t Kenny’s only shocking feature at the Moschino Fall 2017 show!

But baby bangs are the hardest in the bangs family to rock. And Kaia Gerber, 17, did just that yesterday — check out her makeover below! Cindy Crawford’s daughter walked Miu Miu’s Paris Fashion Week show on Oct. 2 in a long brunette wig with bangs that barely covered her forehead. We think Kaia should make it permanent look! But we understand if the model has to keep her hair versatile, as she’s been booking many gigs. A day before Kaia debuted her micro bangs at Miu Miu, she was named the newest Makeup Ambassador for YSL Beauté! And before that, Kaia appeared on the Tom Ford runway for its Spring/Summer 2019 NYFW show, along with catwalk legend Gigi Hadid, 23.

Speaking of Gigi, the supermodel has also experimented with bangs at fashion shows. Her most transforming stab at the hair trend was in a vibrant purple wig at the Jeremy Scott Fall/Winter 2018 NYFW show. Gigi’s bohemian blonde waves are her beauty trademark, so the purple bangs were a definite step outside her comfort zone. And little sister took after big ‘sis! Bella Hadid, 21, also stepped out on a runway rocking an entirely different shade on the color wheel. Gigi’s sister was unrecognizable with a crisp blue fringe on Fendi’s runway during Milan Fashion Week on Sept. 21, 2017.

Check out our gallery above for more big names in the modeling industry like Miranda Kerr, 35, and Karlie Kloss, 26, try out high-end bangs. Maybe you’ll find costume inspiration for Halloween!