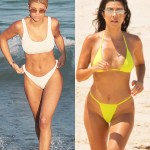 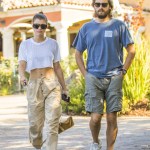 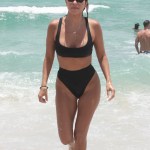 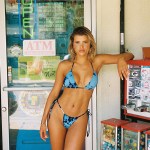 Sofia Richie & Kourtney Kardashian continue their style face off in yet another matching outfit. But who wore the crop top and loose jeans look better?

Kourtney Kardashian, 39, loves to show off her amazing body, and she’s worked hard for it, so why not? She recently posted a photo of herself, over the weekend, in a crop top and jeans, while in NYC. Sofia Richie, 20, also has an equally incredible body, and was spotted rocking a similar look to BF, Scott Disick‘s, 35, baby mama, and it isn’t the first time these two have copied each other’s style.

Kourtney showed up to support brother-in-law, Kanye West, when he performed on Saturday Night Live on Sept. 29. She posted a mirror selfie of her outfit two days later, showing off her white, one-shoulder crop top and loose fitting jeans. Kourt even flashed her nipples as she wasn’t wearing a bra under the semi-sheer top. “Saturday Night Live,” she captioned the pic.

Just a day later, Sofia was spotted out and about in Los Angeles rocking a similar outfit. The model bared her killer abs in a white cropped tank top and light-washed, loose jeans that she paired with snakeskin boots. Sofia’s black bra was seen peaking out of her shirt and she also wore gold cross pendant earrings to complete her look. 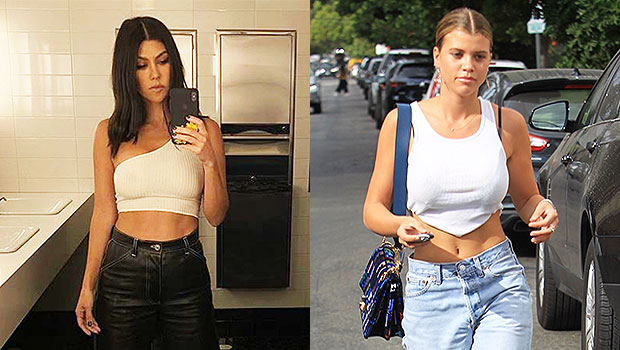 Both ladies looked amazing in their casual yet stylish looks, but it was far from the first time they have been outfit twins. They both rocked similar thong bikinis over the summer and even have similar poses when it comes to taking mirror selfies. However, it’s their similar taste in men that may be causing a bit of tension for Sofia who’s currently dating Scott, Kourt’s ex who he shares three kids with.

After it was revealed, on a recent episode of Keeping Up With The Kardashians, that Scott wanted to have another kid with Kourt, Sofia was reportedly not too pleased. A source revealed to HollywoodLife EXCLUSIVELY that the idea makes Sofia super insecure. “Sofia thinks it is weird and totally inappropriate to even entertain the idea of having more children with your ex just to maintain continuity in the family. When Scott jokes about the idea, it makes Sofia angry and insecure, she really does not like the idea at all.” Scott and Kourt traveled to NYC together this weekend, with no sign of Sofia, so we can’t help but wonder what exactly is going on. We will, of course, keep you updated of any new developments on the Kourt, Scott, and Sofia front.