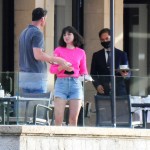 Olivia Munn knows to have fun with fashion – whether that’s sexy AF bikinis or cleavage-baring dresses. Her latest look is a hot twist on a style classic.

When it comes to taking a flattering Instagram photo, actress Olivia Munn, 38, is a social media queen. And her latest look is no exception. On Oct. 2 – just days into the fall season – The Predator star posted a photo on Instagram, showing her looking laidback and chic in a teeny-weeny pair of Daisy Dukes. Olivia paired the denim shorts with a beautiful honey-colored shoulder-baring, polka dot blouse. The photo proved that God blessed her with curves, fabulous legs and a cleavage that she isn’t afraid to celebrate.

Predictably, Olivia’s fans loved her outfit. One person commented on the photo, writing, “Absolutely stunning as always! You were my fantasy pick for the role of Wonder Woman!” Another fan gushed, “And just when I think it’s not possible for you to get prettier…” Yet another person added, “A classic beauty. Keep doing you booboo.”

Apparently, Olivia’s fans are not the only ones mesmerized by her looks. On Oct. 1 the actress posted a clip of herself on Instagram, showing off her should-length chestnut hair. She added the caption, “Remembering the moment this weekend when I saw @sarafoster at a birthday party and she instantly grabs my hair and says, ‘It’s ALL REAL!’” Olivia tagged the photo, “#LALife” and added, “(PS Love you Sara).” For those who don’t know, Sara Foster, 37, is a Head of Creative at the relationship app, Bumble, alongside her sister Erin, 36. And, if their names sound familiar, that’s because their dad is celebrated record producer David Foster, 68.

Back to Olivia. A quick reminder: The actress isn’t just in the news for looking gorgeous. In September she accused her fellow Predator castmates of giving her the cold shoulder for publicly revealing that a bit player, who appeared in a now deleted scene of the reboot, is a registered sex offender. In a Sept. 8 speech at the Toronto Film Festival Olivia said, “It’s a very frustrating feeling to be treated like you’re the one who went to jail for a crime against a child when all I did was the right thing.” The Jane Doe, Paige Carnes, at the center of the case later publicly identified herself as the victim and thanked Olivia via the LA Times, saying that she was “eternally grateful” for the actress who “spoke up for me.”