Kanye still has his MAGA hat on, and it doesn’t sound like he’ll be retiring the controversial cap anytime soon. The rapper opened up about why he wears it — and why his album didn’t drop as planned.

We’ve been seeing a lot of Kanye West, 41, this week — and a lot of his Make America Great Again hat. Between his pro-Donald Trump rant on Saturday Night Live‘s season 44 premiere to his interview with TMZ‘s Harvey Levin, his controversial red hat has been on his head loud and proud. But despite all the controversy it has invited, including alleged teasing from the SNL cast backstage, he isn’t taking it off. And the reason why will definitely surprise you! “I’m punk and I can wear whatever I want cuz I’m a god,” he said. “This is the way I look at this time on this planet. Other times, maybe had a robe on. Next time, maybe it’s like a full electrical suit and we just have our chakras here and everything else is mechanical and we’re just running at a thousand milli-milli-milli-milli — whatever that is.”

That wasn’t the only thing the rapper opened up to Harvey about. He also explained why his album Yandhi didn’t come out over the weekend like it was supposed to. “I didn’t finish it,” he said and later continued with, “We’re going to Africa in two weeks to record. We have to go to what is known as Africa […] and just grab the soil and be and cook food, five meals a day so the metabolism stays up, and have my kids in the studio and have the mic in the open so you can hear nature while we’re recording.” Instead of coming out on Sept. 30, the record will actually be released on Black Friday, Nov. 23.

Fans are in for such a long wait — but it sounds like it’ll be worth it. Kanye said it was on a different level than his past five albums, which he referred to as “superhero rehabilitation.” But Yandhi? “Now the alien Ye is like fully back in mode, off of medication, working out, breathing as much fresh air as possible, thinking, doing, being himself,” he said. 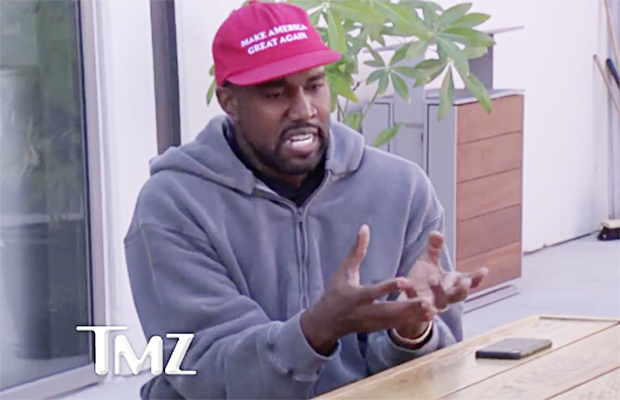 Deciphering his interview may not be easy, but two things are clear. Yandhi is still a long way off, but the MAGA hat is here to stay!