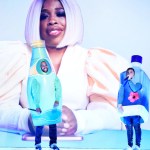 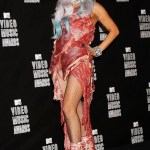 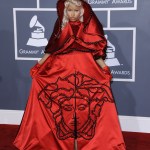 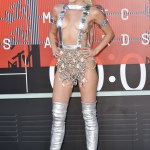 Lady Gaga, Kanye West and more celebs have publicly turned heads in some of the wildest fashion choices over the years and we’re taking a look at pics of the most bizarre ones here.

Who remembers Lady Gaga‘s meat dress? How about Kanye West‘s sparkling water bottle costume? These are just two of the many outrageous outfits celebrities have chosen to flaunt over the years. Whether they were strutting their wild looks on a red carpet or performing on stage, these stars weren’t afraid to put their bizarre choices on display and we’re narrowing down some of the most memorable.

Lady Gaga’s raw meat dress is definitely one look that had people talking for a long time. The singer’s meat outfit, which she proudly wore at the 2010 MTV Video Music Awards, basically consisted of pieces of raw beef shaped into a dress. She even had a matching headpiece and shoes to go along with it and because of the complexity of the meat texture, she had to be stitched into the dress backstage!

Kanye is known for surprising audiences with not only his outspokenness but also his outfits. The rapper performed along with Lil Pump on the premiere of Saturday Night Live on Sept. 29 in none other than giant sparkling water bottle costumes. We’re not sure if Yeezy did it just for laughs or to make a statement but yeah, like Gaga, we’d say that one had a lot of people talking as well.

Some of the other most outrageous celeb looks we’re spotlighting include Nicki Minaj‘s red hooded Grammy Award outfit, Miley Cyrus‘ braless Versace suspenders outfit that showed a lot of skin, and Cee Lo Green‘s gold-colored robot type outfit at the Grammy Awards. Jennifer Lopez was one of the most talked about celebrities for a while after she wore an extremely sheer green dress to the Grammy Awards that practically showed everything underneath and Rihanna‘s overly poofy pink dress at the Grammys also got major attention. Check out the rest of the most outrageous celeb outfits in the gallery above!